Is Any Publicity Good Publicity 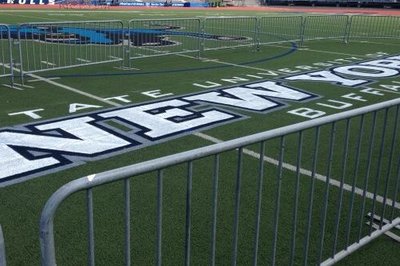 If you're going to be against something be proud about it.

The constant of 2013 was that Danny White made news seemingly everyday. No story was bigger in 2013 than Danny White. He made it his business to be in front of anything that happened. He came in like a hurricane, and gave not a second thought to the waves he made or the institutions he destroyed. He's gambling that his changes will pay dividends, and most of Bull Run is happy to see things change, because were ready to ascend to bigger and better things.

Then the NY Bulls thing happened but we didn't really feel it until the Bull was removed from Alumni Arena, and in it's place, a giant New York State. White then created a concert series aimed at creating buzz for home games. At Bull run we said enough is enough with the hype machine. White don't care. He kept on going.

Even after the Alumni Arena makeover, many thought that would be the end of White's NY imperialism. There is no end. The next casuality to the #NYBI was the jerseys, which got a big New York bumper sticker on the front.

More: NY Bulls Is Closer Than You Think UB Bulls Rebranding Alumni Arena NY Bulls All over the Floor

In the end, whether your jersey says New York or not, it's more important how you play on the field. Danny White fever died down during UB's 7 game football winning streak. Fake Danny White filled the void, and the White Death was invented.

The year ends with much uncertainty for Danny White. He would have won the game if:

Alas, the Bulls lost at the Ralph, and then were embarrassed in a Bowl Game on the same day as the BasketBulls choked the game away in Brooklyn.
More: White Launches NYBI UB Hoops Gets a New (York State) Look Q&A with Fake Danny White Four Horsemen of the Bulls Brooklyn Hoops Holiday Invitational
Danny White still has a lot of work to do.