The Four Horsemen of the Bulls

Share All sharing options for: The Four Horsemen of the Bulls

First there was The Quinn Reaper. After Pasqualoni was canned we started to put it together. Jeff Quinn is a reaper specializing in the souls of college football coaches.

For a long time, that's all we knew about. But this week Tim put together another key piece of the puzzle:

Forget the Quinn Reaper this guy is the White Death...

That's right, ladies and gents. We have another on our hands. Unlike the Quinn Reaper, the White Death focuses his time on underachieving UB coaches - the new volleyball coach upon his or her hire will be the 9th new coach in the White era - and of course the rest of New York State.

What we face is not simply one or two reapers, a singular Davey Jones or Headless Horseman. UB Athletics features a full blown quartet: The Four Horsemen of the Bullpocalypse. Let's just say that we here at Bull Run are pretty confident that when Paul wrote Revelation, he was thinking of these dudes.

The Pale Horse - Death - Jeff Quinn (aka the Quinn Reaper)

The Quinn Reaper is well known to Bulls fans by now. Pale in hair and hoarse of voice, Jeff Quinn is in fact the rider of the Pale Horse. Paul Pasqualoni is his most obvious victim, but Ron English and Bill Cubit have also been linked to the Pale Horseman. Someday Charley Molnar's time will come at UMass, and we'll all know why. You know why Terry Bowden did so well at Akron this season? Which MAC East team dodged Buffalo and its soul-collecting head coach?

Past iterations: None. The Quinn Reaper if the first known instance of the Pale Horse in the UB athletics ranks.

The White Horse - Conquest - Danny White (aka the White Death)

Danny White's conquest of the UB Athletic Department has been well documented, and the White Death has spread effortlessly through the ranks. Only a handful of coaches have resisted - and seriously, thank Goodness for Vicki Mitchell.

Of course, the conquest doesn't end there. If you haven't heard of #NYBI, Danny White hasn't done his job. The White Horse is truly turning his eyes towards conquest of the entire state and its wallets. Only then with enough fans hordes of loyal tributes and sacrificial offerings can UB reach its full potential.

Past iterations: The White Horse and conquest can be seen in The Drive to Division 1.

Javon McCrea hears people say "Make love, not war," and scoffs, but not before reminding them that a much more influential singer once proclaimed "Love is a battlefield," and slicing their guts open. From the day he set foot on campus, McCrea as the Red Horse has been educating his peers on the Art of War as he patrols the paint and is a commanding presence on the battlefield hardcourt. His favorite target is the poor piece of iron that serves as a basketball rim, but he'll happily compete against anyone. In fact, he has been known to grow bored with basketball and break down great military strategies from The Crusades, Waterloo, and Gettysburg while combatting the enemy.

Past Iterations: The Red Horse has been seen in UB past as Mitchell Watt, who waged vicious war against shot attempts, and as Tim Cohane, who mistakenly waged war against his own team.

The final horseman of the Bullpocalypse is by far the most wide reaching. Like a plague upon Egypt, Khalil Mack has assaulted NCAA offenses and choked the life out of them to the tune of NCAA records for Forced Fumbles and Tackles For Loss. While Mack has feasted on the conference and sets his eyes on the first ten picks of the NFL Draft and the next level, schools all over Ohio and Michigan celebrate the end of an unprecedented four year famine. 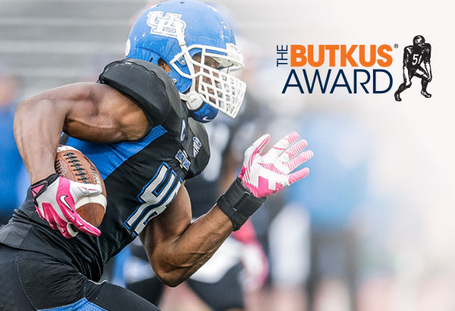 Khalil Mack is The Black Horseman of the Bullpocalypse - via ubbulls.com

Past iterations: Prior to being drafted by the Twins, Bulls OF Jason Kanzler had a similar effect on MAC offenses, and Career Steals leader Andy Robinson was no stranger to inflicting famine himself.