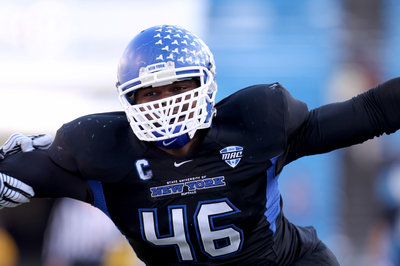 Before the season started, I was very proud of the "Road To Columbus" series we were able to run. We were not only able to preview every Bull, but we were able to acknowledge where they came from and how hard each athlete worked to make the 2013 season a great one. As anticipation grew, David asked us how many wins we'd get and I ranted about the MAC preseason poll.

Once the season started, and we got past that rough start, we really started to have fun. UB won the Ontario Sandwich for the first time, sunk the row boat, and beat UMass to retain the Powder Horn. The now infamous Neutz Hit provided a bit of controversy, in a strange run of about 8 weeks with no controversy or negativity on Bull Run.

Buffalo continued to roll and so did the amazing highlight plays. Everyone's favorite highlight was BO blowing past a Kent State defender for a TD and I recalled my fond memories of Ohio coming to UB Stadium to catch a beat down.

The ending was bittersweet. UB finished 1-3 with losses in the Bowl Game, in the MAC East title game and at Toledo, with their only win coming against lowly Miami (OH not in the face). The Conference rewarded the Bulls for their play, making Mack the DPOY and honored six other deserving Bulls.