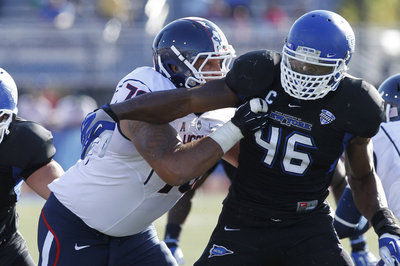 UB Bull Run started in 2009, which means the site has covered an entire recruiting classes journey. Even during the depths of 20[redacted] stars like Alex Neutz, Steven Means and Khalil Mack shined bright. In 2013, the whole nation turned their eyes to Khalil Mack, the best NFL prospect in Blue and White since Gerry Philbin.

Once Mack decided to return for his senior year, an offseason of hype followed. He was on the award watch lists and on the lips of every coach who had to face UB. The season started on ESPN at Ohio State. Anyone who did not know the name Khalil Mack got real familar.

Mack continued to be the big play guy on a UB defense that led the Bulls back to a bowl game. Mack tied and broke the NCAA record for forced fumbles in a career and tied the record for career tackles for loss. Mack earned an invite to the Senior Bowl and he earned millions as his draft stock surged into the top 5.

Mack not only brought national attention to Buffalo, but even more difficultly brought local attention to the Bulls as Bills fans began to take note of the top 10 talent in their own backyard. Mack won the Jack Lambert award, was named an All-American and was regarded by those who know as the best Bull in the modern era.

We may never see another Khalil Mack, but hopefully the work he did bringing the program from the depths of 20[redacted] to the heights of 2013, will help bring in many many more athletes as talented as #46.