What does 2013-14 Basketball and 2013 Football have in common? They both are spoiled with talent recruited by the Head Coach's predecessor. For the coaches, this put extra pressure on them to perform while the talent is still in Blue and White. For the fans, it provided a fun year that showed the potential UB has to recruit and develop superior talent. As voted on by Hustle Belt, Buffalo enjoyed 7 of the top MAC Football players and 3 of the top MAC Basketball players in 2013. 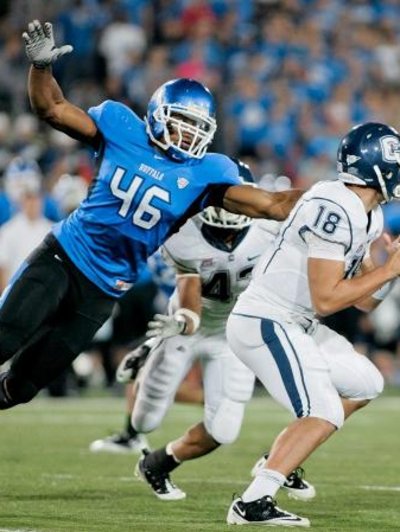 Colby Way was underrated at #28 and Oliver was criminally underrated at #21 as a result of his injury in 2012. Alex Neutz is one of two Footballers ranked in the top 20, he came in at #14. Finally, Khalil Mack was ranked as the #3 Football athlete in the MAC.

On the Basketball side, Jarod Oldham at #14 and Will Regan came in at #8 but to no ones surprise, Javon McCrea was named the #1 Basketball player in the MAC.