After players on Special Teams & Offense, UB's third player in the top 68 is on the defensive side.

It is easy to overlook a shutdown corner. If no one throws your way, you can't really amass any defensive stats. This is not Najja Johnson's story. Teams have tested him, and usually Najja wins. The stats are there: Najja led the MAC with 5 interceptions and added 11 passes defended. However, the MAC still overlooks Najja, he was left off the 2012 postseason awards list. Fortunately for UB, Najja is used to outperforming expectations.

Born in Buffalo but raised in Georgia, Najja returned to the snowy city as a walk on in 2009. Under Turner Gill, Buffalo had just won a MAC Championship and were gearing up to make a few more runs at the title. When Gill left and leaders in the secondary graduated, Najja seized his opportunity to gain a scholarship and a starting job.

In 2012, Najja continued to improve, solidifying himself as the best player on a young defensive secondary and the third most important defender on the team behind Khalil Mack and Steven Means. UB's defense went through three phases in 2012: First, they pressured the QB and hung the secondary out to dry. This strategy resulted in 17 sacks, 1 interception and 1 FCS win. Then UB dropped everyone back in coverage giving the QB lots of time but supporting the secondary. Of course that is a terrible idea and it led to 2 sacks, 3 interceptions and an 0-4 record. 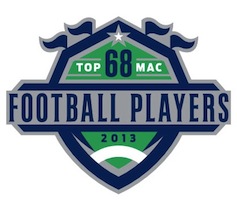 The season turned around when the secondary was able to shed the extra support and UB was able to put more pressure on opposing QBs. In the final four games, UB recorded 15 sacks, 9 interceptions and a 3-1 record.

Those last four games have given UB nation hope they haven't had since 2009, and it should make MAC QBs and their fans sense something, a presence they've not felt since...2008. An aggressive UB secondary looking to force fumbles and intercept bad passes, while giving the team the freedom to send extra guys at the Quarterback...and Khalil Mack will be there.

This year Buffalo fans expect to see that Buffalo defense, led by Najja Johnson, a corner we feel should get the Darrelle Revis treatment: MAC QBs should just throw to the other side of the field (even though a promising corner by the name of Cortney Lester had 4 INTs in 2012 and is waiting on that other side).

Najja was named to the 2013 Jim Thorpe Award watch list as well as 1st team on Phil Steele's preseason All-MAC team. If he continues to exceed expectations he will either put up some of the best stats in UB cornerback history, or he just might be overlooked due to his lack of stats. Either way, if Buffalo sees any success on defense, we know that we will owe that success to the hard work of our former walk-on superstar, Najja Johnson.