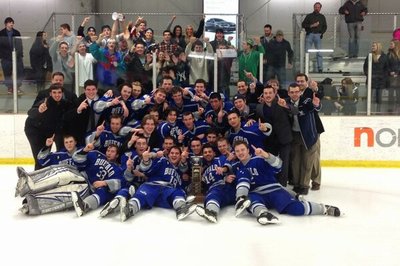 In about the best hockey game this year, at any level, Buffalo tops the puprs in for the NECHL title.

For now, UB is left with the testament to the strength of grassroots hockey in Buffalo the ACHA Division 1 Club Hockey team. Tim took an interest in the Hockey program early, and they repaid his interest with a stirring double overtime win in the NECHL Championship over the hated rivals from Niagara. This year the Bulls are looking strong again and find themselves ranked #20 at the winter break. UB hockey returns in 2014, and Bull Run will continue to be there as they surge towards a 2nd consecutive NECHL title.