There was never a dull moment as Danny White held every sport except Football to the highest standard of winning. No one was safe, as White was able to put his own stamp on almost every sport in the department. Is it the arrogance of youth, or the start of a new age that won't accept losing after 15 years in the MAC where losing has been then norm? Only time will tell. 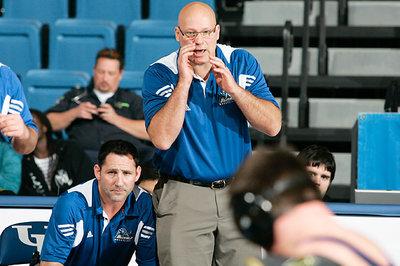 Beichner had been at the school for eighteen years before Danny White, let thewrestling coach go

First Stu Riddle was hired to run UB Men's soccer. He inherited a 5-11-1 team and took them to a 3-11-4 season. The jury is still out on that one. Later in the year, the hiring of Doug Marrone with the Bills cost former defensive coordinator William Inge his job with the Bills. Sadly the popular coordinator did not return to the Bulls, he went to Indiana where for what it's worth, his defense held Bowling Green to 10 points.

Danny White then fired a man who started at UB when White was a teenager. Jim Beichner, UB wrestling coach, was 151-120 in his career before a 1-11 season in 2012-13 with 61 wins since 2005. Beichner was replaced by John Stutzman, a 1998 Buffalo grad who worked under Beichner as an assistant coach before moving to NIU and then Bloomsburg.

On April Fools, Victor E. Bull was fired, but the joke became truer and truer as the pink slips continued to flow from Alumni Arena. Softball loss their coach Jennifer Teague and she was replaced by Trena Peel, a 2002 graduate of LSU who in 2013 coached Hampton to a conference title and the NCAA tournament for the first time in 7 years.

The firings continued late in the year as Women's Soccer Coach Michael Thomas was fired along with Women's Volleyball Coach Todd Kress. Those positions have yet to be filled, so there will be more new faces in 2014. The Warde Manuel era is almost completely eradicated, with only Jeff Quinn surviving, what a crazy year.