The Postgame Meal: Ohio. Your Tears Are Delicious

Share All sharing options for: The Postgame Meal: Ohio. Your Tears Are Delicious

This was going to be the year. No losses to Miami, no epic collapses in the MAC Championship. Ohio had a Senior team, a Senior QB and the national stage to show that they are the true champions of the East. Not so fast. Buffalo held Ohio at bay in the first half, then, in the second half, Buffalo beat Ohio like the Marching 101 beats drums.

In the aftermath, Ohio fans felt:

Shock "Why isn't Tettleton running? Why aren't we doing anything on offense?"

then Anger "OMG THAT CALL IS THE WORST CALL OF ALL TIME, WE SHOULD WALK OFF THE FIELD (even though there is 29 minutes left to play in a 1 score game.)"

then grieving: "wahhhhh I hope NIU beats them by 100, I bet the golden ticket makes the chocolate taste terrible, I'd rather lose with class than win without grace, wahhhhh"

They haven't accepted it yet, and I hope they never do, because while many in Blue and White believe that the phantom safety and possibly the knee down fumble have tainted the Buffalo victory, giving Ohio fans the opportunity to deflect from the epic beatdown they received and instead blame the referees,...

Ohio started two scoring drives on the Buffalo 15 last year, and walked away saying "Khalil Mack. Not so tough." So I'm glad the refs screwed you over Ohio. You deserved it and more importantly WE deserved it. I would call Ohio the New Temple...but Temple only lost to good teams. Ohio lost to CMU in 2013 and Miami in 2012. Ohio Football is it's own joke, I will simply refer to you as Ohio Football and laugh and laugh.

Pregame there was talk about Senior leadership and "being there before" being the key to Ohio's victory. Funny how, one bad call that made it a 6 point game instead of a 4 point game was enough to rattle those Seniors out of their game. Every year I see Ohio at the top of the MAC East predictions, and every year I'm sure they won't make it to Detroit, and I am personally happy that UB sent Bobcat fans to the phones to cancel their hotel rooms in Detroit.

There is always basketball season Bobcats...oh wait UB has the #1 player in the conference this year.

Tears of Chios. Chios is the fifth largest of the Greek islands across the sea from (the good) Athens.

We ordered food, but the UB defense did not allow it in. They are feasting on your postgame meal, because they aren't happy until you just give up and go home and reheat whatever you had in your fridge. UB Defense eats, everyone else starves. I wouldn't have it any other way.

It could only be:

Alternatively since they didn't know who we be, I bet they know now, you could continue DMXing with "What's My Name?"

Quinn and Tepper have done all we wanted and more. I don't think we dared to say MAC East champs, but now we are all but guaranteed a chance to play for the Division. They earned their money and the extension and if not our love our respect. Long live the streak. I hate that I have to keep putting this in but superstition and all...(FIRE QUINN).

It's funny because UB has started slowly and we really want to be able to breathe at halftime. Jeff Quinn don't care and that makes me happy. Playing our game, defense and grinding on the run game. When we threw the INT, I thought well, our defense can hold and Neutz wins 89% of those balls, might as well take the shot. The only thing that would have upset me would have been an incomplete pass and a punt.

11 Factors to decide the game

Pregame: But but but, Ohio's defense is better #Sacktion. Can UB establish the run, or will Ohio make UB one dimensional?

Postgame: UB made Ohio look like UMass. By the 3rd Quarter, the offense controlled the defensive line, any adjustment by Ohio led to favorable matchups for Lee and Neutz.

Ohio: Star of the Game: Travis Carrie,CB from Antioch, California

Pregame: Can Beau Blankenship run on the UB defense? Will Tyler Tettleton cement his legacy as a great MAC QB?

Postgame: Blankenship only managed 68 yards and Tettleton only managed 126 yards with 45% passing. Tyler Tettleton ends his career as a starter against UB 51-94, (54%), 512 yards, 2 TDs, 2 INTs with 23 carries for 43 yards and 1 rushing TD. That's 3 starts, and a 1-2 win/loss record. Extremely mediocre as his apex was during Ohio's glory days and Buffalo's unmentionable years.

Since 2006 Ohio is now 9-7 in late season games on Tuesday, Wednesday and Thursday losing their last 3 ina row.

Affectionately nicknamed "the hack" for his ability to fix all the problems UB faced with Tepper's defense in 2011, Redden's absence scared many a UB fan. Cochran had a reception of 27 yards or longer in 6 of 7 games coming into the UB game, and his big play ability scared the UB fan who had a front row seat to the Baylor game.

Postgame: Cochran got a 27 yard reception for the 7th of 8 games this year, however he was held in check with only 3 receptions for 42 yards. His big catch on Ohio's first drive was squandered and he had little impact after that.

Jarre Franklin on the other hand, made the most of his opportunity. The Freshman from St. Charles, Missouri saw his first action against Baylor and had 10 tackles and 1.5 tackles for a loss heading into the Ohio game. Against Ohio, Franklin led all Bulls with 8 tackles, and 1.5 sacks. Next Bull In indeed.

Somewhere in Buffalo an 11-year old carries a sign that reads: "11 years old, 8 blown calls in our favor"

Pregame: UB could come out ahead of Ohio early,

UB could come out slow, trading punts with Ohio and pressuring the Bobcats deep into the 3rd quarter until hopefully the Bulls take over.

Postgame: Just like the UMass game, Buffalo was content to run and stop the run and see which team had the stomach for man ball. 7 up 7 down, if you aren't in the BCS top 10, you aren't man enough to beat UB.

Winner: New York, if those things matter although it seems anyone can get into Ohio: 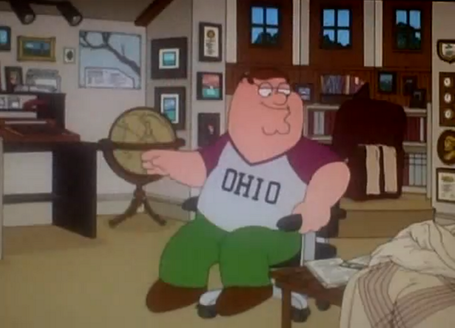 Pregame: Will UB there? UB has never had a top 10 crowd in November. Will UB fans show up to keep the atmosphere hostile?

Postgame: 22,918 listed attendance. Before this season, that would have been the #3 crowd in UB Stadium history. Real numbers or not, it is important to note real numbers are never used. Eye test says Temple and Syracuse are the gold standard, listed at both 29k+. As far as I've heard, were about 7k sold and 11k butts in seats to match that, but it seems were getting closer, if we could sustain success, over the course of a few years we would get there. This is basically Licata year 1.5, by Licata year 3, with wins, UB could be Buffalo's team.

Consecutive wins: 7 games, most since the 19th Century

Consecutive home wins: 7 games, the 1983-84 squad won 8 in a row at home, UB can technically match that with a win over BGSU.

Buffalo has won 10 of their last 13 games: This is the best stretch of UB football since the 1986-87 Bulls won 10 of 13. UB finished 9-2 in the 1986 season defeating Cortland, Buff State, Rochester, Villanova, Canisius, Brockport, Alfred, Albany, Frostburg State with losses to Towson and Ithaca. In 1987, UB opened the season with a loss at Findlay and a win at Buffalo State.

This is the 3rd time UB has won 5 MAC games in a season, each of those seasons, they defeated Ohio.

New York: 9-0-1 The Referees call this one for the Bulls!