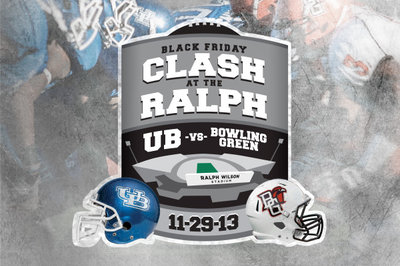 UB Bull Run has always advocated for more integration between the Bills and the Bulls. Danny White wasted no time, moving the final game of 2013 to Ralph Wilson Stadium setting up: Black Friday, The Clash at the Ralph.

The novelty game turned into a de-facto MAC East Championship game as the Bulls faced the Bowling Green Falcons. Slight criticism, some from former BGSU coach Clawson arose now that UB would lose their UB Stadium home field advantage in such a vital game.

And maybe that was a factor as UB, 5-0 at UB Stadium, was defeated in their "home" finale at the Ralph. UB missed out on a trip to Ford Field to play for the MAC Championship, but I for one still liked the idea and heard positive feedback from fans in attendance.
More: Blackout the Ralph Buffalo BGSU Clash at The Ralph Clawson Calls out the Ralph

I look forward to more games that take advantage of the resources in our area. More Ralph games? A game at the Skydome? The dreaded game in New York City? I'm interested in all of the above...and UB has a 7th home game in 2014 which would be perfect for a neutral site game.