Buffalo Bulls move their games to "The Fan"

The announcement moves UB programming back to a sports only station.

Share All sharing options for: Buffalo Bulls move their games to "The Fan" 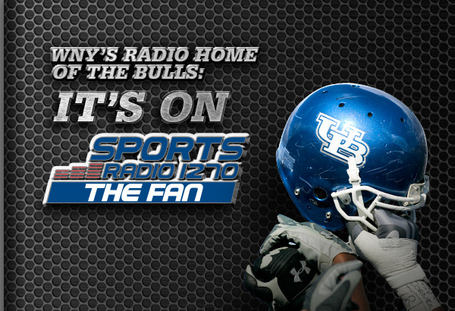 The University at Buffalo has announced that is will partner partner with Sport Radio 1270 The Fan to broadcast football and men's basketball games as well as other programming surrounding UB Athletics. This is a move away from WECK who held the UB rights since 2008.

UB will also make waves when they are not on the field. In their past radio relationship, specifically on WGR there was little talk about the Bulls when they were not playing. This year Jeff Quinn and Bobby Hurley will have a weekly show hosted by Gaenzler. In addition, UB student-athletes and coaches will be frequent guests on Gaenzler's show.

In other words the commute home from work will feature talk about UB, something that has lacked in the Buffalo media market.

"This partnership enables us to showcase UB Athletics on one of the top media platforms in the Western New York region. Sports Radio 1270 The Fan is an exciting new sports radio station and the CBS Sports Radio format will help us broaden our messaging to a wide audience and enhance our brand." -- UBAD Danny White

Cumulus Media, which owns Sports Radio 1270 The Fan, also owns popular local stations such as 97 Rock, 103.3 the Edge and Classic Hits 104.1. What was not announced is weather or not the Buffalo games will also be braodcast on the FM band as part of this agreement.

The Fan just converted over to sports talk in 2013 after picking up a partnership with CBS sports radio.


"After launching Sports Radio 1270 The Fan in January, our first priority became securing a partnership with University at Buffalo Athletics. Our local group of Cumulus radio stations, which includes 97 Rock, 103.3 The Edge, and Classic Hits 104.1, couldn't be more excited about being a part of the future success that the UB sports programs and alumni will bring to Western New York. Go Bulls!" -- Cumulus VP Steve Bearance said.

Calling the play-by-play action of Bulls football for his 14th year, and sixth consecutive, will be Paul Peck. Serving as the analyst for the fourth straight season will be Navy's all-time leading passer and former Western New York Player of the Year Jim Kubiak. The football season kicks off on August 30 at Ohio State.

Josh Whetzel will return to call the action for men's basketball for the eighth season when the season tips off in November.

Another in a series of moves that indicates White really thinks UB can penetrate into the buffalo sports media market. WHLD has a better coverage area than WECK, and will put UB far more front and center than either WECK or WGR.