Just in case you thought this whole "New York Bulls" thing was far removed from reality.

Start Spreading the News,
Rebranding Today
UB is a part of it
New York, New York

Since the effort to play up the "New York" aspects of UB's existence became an open secret the fan base has mostly gotten on board. More information on how this might look long term should be released but for the time being so long as it's done in a way to maintain the City's image you can get buy in from most people.

The first sign was the "Helmet Bumper" which is pretty minor but when a team decides to redo their floor with the Sate of New York in the center then the winds of change are blowing.

In case you have trouble seeing New York in the image above here is some help. (Thanks to the guys on UB Fan for helping me see this)

I can't imagine that the logo of UB will left out but the primary thing that TV viewers will be seeing is the Empire State at center court.

Not Subtle but it's not renaming the school either. The question is how will the people of Buffalo who are not already fans take this?

As work proceeds It's looking better and better 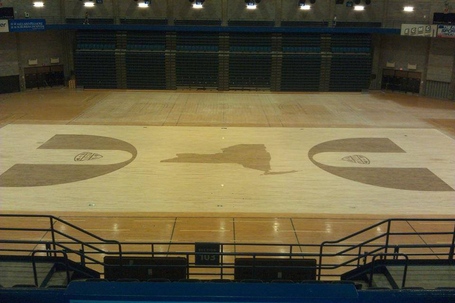