Director White, it's time to talk....

Danny, Can we call you that? 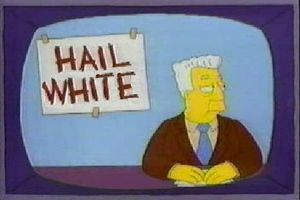 Back when you took over UB Athletics we published an open letter introducing ourselves. It was a shameless cry for attention which also spelled out how Bull Run differs from other outlets that cover UB Athletics. Part of the difference is honesty.

Welcome Danny White! An open letter from Bull Run - Bull Run
6) A friend tells you the truth - Outlets like "The Buffalo News" or "Buffalo Sports Daily" are never going to outright tell you about the awful mistakes you make. We're your friend, when you screw up (and we all do from time to time) we will let you know in a pointed, yet appropriate, fashion. If needed we can even host the occasional intervention.

So now we've had a year to get to know each other and it's been great, really. There is, however, something you do that is starting to hurt UB fans who love their school and it's teams. The thing you're doing to hurt us is building up every change you make as a "Huge" or "Exciting" event.

It's got to stop.

It's a great idea, and it will enhance game day. That being said did it really warrant a four or five day build up? A tweet on Friday followed by a virtual twitter blackout by the entire staff. Then an entire day of tweets talking about how "Today is the day" and "Any time now".

In a way your success in other endeavors at UB charges you with a responsibility not to sell every thing up as "the next great thing". Don't force hype onto every announcement the department makes.

When I deep fry a turkey its an event, when I change brands of MAC and Cheese not so much. Both are nice but one is something to crow about and the other is just a part of the job.

It's not that the little things are not important, we understand things like the concert series will help get some people to the game. Changes like the ones to stampede square may finally bring about a true tailgate atmosphere among non die hard fans.

They are good changes, but not really the kind of things that people want to watch twitter their whole afternoon for. So keep up the good work. Both the big things and the small things are awesome, just use some digression in what you call "huge" or "exciting".

Your friends over at Bull Run,

If you pull a band with more than one top 25 hit in the past few years for one of the other concerts, that would qualify as exciting, huge news.