UB Athletics Danny White is already starting to solicit money for his phase one facilities improvements. The University has sent out brochures with impressive concept drawings.

Share All sharing options for: UB Stadium improvements - Phase one "The East Club"

Some time back director white made bold on the field house and other capitol improvements he would use to fund the adventure. Well UB already has produced some concept drawings and sent out promotional materials to long time ticket holders. And it's an impressive yet achievable phase one. 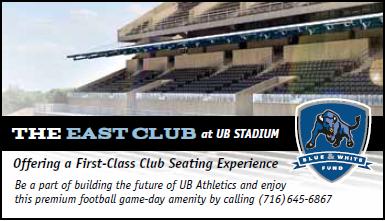 Phase one is basically a confiscation of the upper east concourse for people who want to watch football under heat lamps and with a climate controlled club behind them.

The group, which my sister calls "Top hat fans" is typically made up of companies that buy blocks of seats, at least that's the way many sports venues target their sales.

The seats are already being marketed in business publications like the "Executive News" publication aimed at the Buffalo Niagara region. More than once as a contractor I was treated to executive club seats by an employer.

The advertisement shows the second level seats with a canopy roof. I've seen in other publications that the canopy will have ambient heating elements to make those late November games more tolerable.

Such Ambient units are everywhere in the Twin Cities so I can say, with some experience, that they can make a 20 degree below zero day bearable. They will have little trouble warming up a November evening in Buffalo. 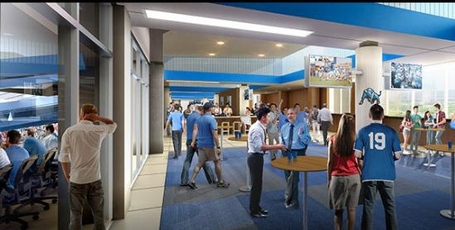 But in the event that heaters can't get you warmed up enough the discriminating football fan will be able to step inside to the East View club. The Club exists today as the second level concourse.

The current structure will be closed up with windows and then have other amenities added.

I am assuming that is a sanitary way of saying Alcohol and Wings will be served.

The East Club will also have private Bathrooms and TV's throughout showing the UB Game and other MAC games of interest.

So the question is how are we paying for this and will it work? The goal as stated by White is to use these improvements as a revenue stream aimed at financing larger projects. The field house, lowering the track, and other stadium improvements have all been mentioned by the UB Athletic Director at one point or another.

The way UB is paying for this seems to be the only hitch. When season ticket renewals went out this year they included a note which indicates that while ticket prices are staying the same the assignment of seats will be based on the level of contribution to the "Blue and White club".

I don't have the details as to if the ticket prices have changes and the donation will assign seating or if this is just about getting the donations for new seating.

If I ran the world people who have held seasons tickets for more than five straight years would be exempt from such a seating provision. Some of the long time fans have been paying to see a team with just one winning season since jumping up to Division One, and they did not need heated seats or wings and beer to do it.

Aside from that group of fans the donation fee to pick premium seats makes sense.