So the basketball court and advertising campaign were not enough now the uniforms are being changed.

Share All sharing options for: Buffalo Bulls continue to push a New York State of mind

The University at Buffalo has been re-branding everything this summer. The school is not officially changing anything but the Athletics Department, under the guidance of new director Danny White, is doing everything he can within the confines of the State University system.

First it was the basketball court and now it seems the football jerseys are getting a subtle upgrade. The change is in the form of a new patch above the numbers clearly accentuates NEW YORK, which is different from previous jerseys that just said BUFFALO.

This, and a Matte finish on the helmets seem to be all the changes to the uniforms this season. 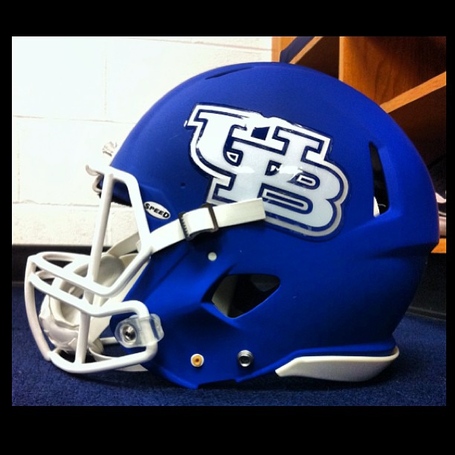 The department also published a new strategic plan this week emphasizing their desire to sell UB as the premier public institution in the state of New York.

If you're going to do something you might as well do it completely and do it correctly. That seems to be the mentality of Danny White who has gone far further with this "New York" campaign than I had thought he would have, or could have.

With the power five sabre rattling about a "New Division" which would, in effect, sever the ability of mid majors to move up this is either perfectly timed or too little, too late.

If there were a split New York would once again be one of the few large population states with no Public Universities playing at the highest level. In the past other states have applied muscle to pressure acceptance of a university into various conferences could New York do the same?