Is any publicity good publicity?

If you're going to be against something be proud about it.

Share All sharing options for: Is any publicity good publicity?

So there are three other bits of "New York" news this week.

The first is that UB is going to have a weekly, one minute, update put out by 660 the fan. WFAN is the flagship station of four Tri-State area (New York, Connecticut, New Jersey, Pennsylvania). It's where fans of the New York Mets, the New York Giants, the New Jersey Devils and the Brooklyn Nets.

This fits in with the fact UB's second largest alumni base, and largest source of current undergraduates, is the down state area.

The updates will provide notes on upcoming events for UB football and basketball. There will be 20 weekly reports on Fridays, with two replays of the reports to be played the following Saturday mornings prior to kick-off. They will begin in August and run through March and the basketball season.

The second piece of "news" is the ink getting laid down on the football field. The New York text has made it onto the gridiron. It's on the helmet bumpers, the jersey, and not the grass. Were it not for the fact we have already seen the helmets this summer I would be unsure that the UB helmet would not look like this. 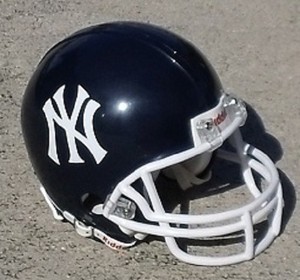 Of course it's nothing nearly that grotesque, as a Red Sox fan that would get me on the side of the people who want to flog White.

That brings us to the third thing worth talking about. It's not news that some are unhappy with the "New York" push. Their standard barer in the media seems to be Bob DiCesare of the Buffalo News. DiCesare has never been a fan of White that animosity was cemented when White fired Coach Reggie Witherspoon.

DiCesare has taken to finding anonymous members of the UB Alumni Association’s executive committee who are throwing a hissy fit because White did not consult them before bringing a bit more of the State to our State University.

White met today with the committee to go over the branding initiative which some feel pushes Buffalo out of UB.

Larry Zielinski, a past president of the association I think has a right view of the situation. Some people are afraid of change and hyper sensitive about Buffalo. Zielinski said he hasn’t heard widespread concerns about the new marketing approach from members of the association's larger board of directors.

But DiCesare got his quote from an anonymous member. Apparently White's decisiveness in doing this has rubbed some the wrong way. White started the ball without White consulting or informing alumni.

I *HATE* when people are pissed about something because they were left out of the process, not because the process is awful. I have no issue with anyone who says "I hate the New York Thing because it's a bad idea". I can't stand the people screaming "It's a slap in the face because you did not ask me first".

I know many a UB fan who hates the NY push and they make a great case, stand on their platform, and deal with the opposing views. That's cool! Being a South Buffalo kid I love nothing more than a good argument that can end with a pint.

I don't personally know any functioning adults whose problem with "New York" is that they were not personally consulted. You hired White to direct the department so for the love of Pete let him do his job.

Bob said something on Twitter that can not be ignored.

@UBBullRun I find the logos a slam on Buffalo. It was a good idea poorly executed which is what happens when people act on their own

If bringing New York into the equation is "a good idea" then how in the hell is it a slam Bob? If the execution is poorly done that makes the move an incompetent one, not a slap in the face. Please stop trying to be on both sides of the fence here.

Or are some people just so mad about being left out of the process that have to make loud noises?

This is gold if you're a paid journalist! Your job is to get eyes on a the paper, something scandalous. If you can say that Danny White is slamming Buffalo and turn him into some sort of Snidley Whiplash all the better.

I don't agree with everything White has done, but at least hes been decisive. Decisiveness is something Buffalo badly needs right now. If the implementation is not perfect it's not the end of the world, but if we sit around for another two years "discussing it in committee" then nothing gets done.

Here's the ironic part. The person who's career will be most affected by the result of this change is White. So far he has been something of a golden boy at previous jobs and that has helped him move up to the role of AD at a very young age.

If "New York" Flops then DiCesare will sell print and White will seriously damage the prestige he has been building. If it's a success and White is gone to something bigger by May 1st as DiCesare predicted than the Buffalo News can sell print as UB becomes the object of more interest. Running it down now is a no lose situation for DiCesare and he seems to realize it.