Ok, so this may not be the real Danny White, but I am sure the Real Danny would have answered the same questions word for word.

Share All sharing options for: Q&A with Danny White

On the anniversary of Danny's year and half tenure at Buffalo, Bull Run, has the exclusive interview with the Fake Danny White.  Some may say this really is Danny White just being honest, but judge for yourself.   I found Danny to be honest, introspective, wise beyond his years on earth, energetic, and strikingly handsome.  I also see that it has been a hell of a culture shift from Indiana, Mississippi, and landing in Buffalo.

(1) How do you plan to gain a foothold in all of NYS with Syracuse in the way?

Well I can certainly tell you what I'm NOT going to do. I'm not going to invest in some silly niche sport like lacrosse like Syracuse. You know what lacrosse gets you where my dad works? A whole hell of a lot of bad publicity, that's what. If we do not learn from our history we are doomed to repeat it.

Furthermore, I'm not convinced this "New York's College Team" thing from Syracuse isn't just a half-assed joke they're playing on their 3 or 4 donors. Anyone who follows college sports knows that the true standouts in this state are Columbia and NYU. That's by my own proprietary research, at least - the New York Money Index. #NYMI for short.

I'm not concerned about Syracuse. Otto needs a gastric bypass procedure yesterday and everyone knows oranges don't grow in God-forsaken Onondaga County. And 44 is a stupid number. I like 46 better. 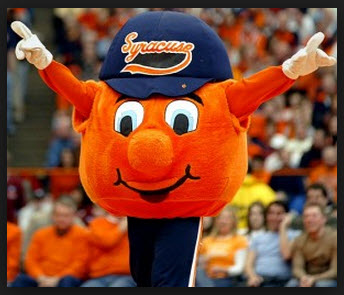 (2) Word on the street is that Coach Jeff Quinn likes to call himself "The Old Quinner." Do you have any input on that? We here at Bull Run have our own nickname for him: "The Quinn Reaper".

You, know, I love Jeffrey. I really do. He's such a wonderful leader, motivator, and classy representative of this great University. To date I've only been able to find one way to show my thanks. I think you heard about that one. Took a while to dot the 'i's and cross the 't's, but he gets a bonus for every tweet in which he forgets to turn caps lock off, and we reimburse him for all his Ricola lozenges. Sometimes after he's been talking a lot we make him do his Batman impression. You close your eyes and he sounds just like Christian Bale!

As for the nickname, well, we just can't have the Quinn Reaper. It reminds me too much of death, and dead people can't give us their money (Please consider leaving a donation to the State University of NEW YORK at Buffalo in your will. Contact the Blue and White Fund if interested.) The Old Quinner, well it is what it is, you know? Sometimes he talks in the third person and thinks he's pumping up Dan LeFevour and the Central Michigan Chippewas, but we just give him a Ricola or two and he comes back eventually. Maybe we should devote some energy to an appropriate nickname with monetizing potential. I'm thinking "New York Alias Initiative." #NYAI for short.

(3) Please describe your evolving relationship with the Buffalo News

They're nice people, you know? They're talking about us, but I guess there's other sports teams in town. I'm not really used to that coming from Oxford, Mississippi or my hoops days in South Bend. I've asked them about changing the name of their paper to the New York Bulls News, but they've ignored me. In general they seem more concerned with a sport called 'hockey.' I've never heard of it. I'm working a program to increase their engagement with us - the New York Newspaper Initiative. #NYNI for short. Maybe some day they'll give us more attention.   They should also be embarrassed by the Gusto.  Really, that is all that is happening in Buffalo?

(4) How are you going to get the body of alumni still opposed to #NYBI on board?

I'm going to leave them with no choice. Did you see what I did with the loyalty points this year? That's not the end of it. Ask again next year.

My father used to tell me: "Son, there's 22,000 types of people in this world: those who can count, and those who can't." I've never quite understood that one, but trust me, the people who can count to 22,000 and then donate that stack of bills to our school will not be opposed to #NYBI. I will see to it.

(5) What's next for the team name, then? Both long term and short term.

As we all know, the New York Bulls Initiative has become a smashing success. Except for you, Bobby! I don't even think Niagara is a real school.

Anyway, we've found great success, and we're forming a committee to explore further expanding our brand. As we become more prominent, we must also take on the shawl of responsibility. We owe it to the world to bring them the highest quality of life, which can only be delivered through football. I'm told that there are countries all over the world who favor a sport called "soccer," in which you use only legs for 90% of the game. My friends, here at Buffalo we use more than 10% of our brains to think and we use more than the bottom 10% of our bodies to play sports. With the formation of the North America Bulls Initiative, we will bring our life changing product to the whole world. #NABI for short.

Can you expand on that?  And also how has NYBI been received beyond alumni and any changes or afterthoughts?

Yeah. Actually going to change to North America Bulls.  Not sure if you know this but there is a place called Canada and no one properly explained the rules of football to them.  Also they throw crazy money, er I mean support to a fringe sport called hockey.  Do you ever see that sport.

Also, how about our neighbors south of the border. As we talked about, they love a sport where you only use half your body.  We need to help developing countries.

Thank you Danny for carving time with us in the lobby of M&T Bank.  We appreciate it.

Thanks very much for having me, guys. Looking forward to seeing 22,000 rowdy Bulls fans at the Ralph next Friday!  I am asking all alumni to please do not try to slide down the side of any parts of Ralphie Wilson Stadium.