Share All sharing options for: 24 Hours to kickoff: Boise Ross

Sophomore (2014): Ross played in all 11 games and was 4-4 as a starter. In the first two games of the year Ross caught 8 balls for 69 yards. As a defender for the rest of the year, Ross recorded 26 tackles, defended 7 passes, recorded 50% of UB's total interceptions (1 of 2) against BGSU and Ross scored on a 75-yard fumble return against Ohio.

Outlook: Ross improved every week, and was a big reason for UB's defensive stand in the final two games of the year. With the defense overhauled with a new scheme and mostly new players, Ross is going to have to play at All-MAC levels if UB wants a shot at a successful season.

After 1 quarter, Branden Oliver had 13 runs for 46 yards and 2 TDs, Ohio's offense only had 11 plays, 36 yards and a TD. A pair of long well executed drives led to two BO TDs, but UB special teams failed them, allowing a 67 yard kick return that set up a quick Ohio score. 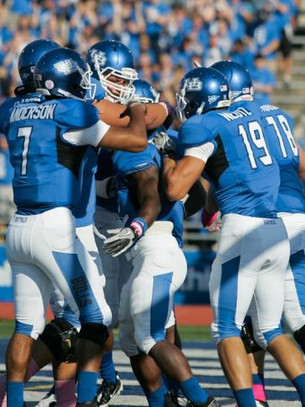 his seems to be the week where UB found its stride

The run established in the first quarter opened up passing lanes in the second quarter, and Chazz Anderson took advantage when he found Alex Neutz for a 36-yard TD to give UB a 21-7 lead.  Ohio answered when their other long time nemesis (the first being special teams coverage) a running QB struck. Tyler Tettleton ran 40 yards for a TD to keep the game close.

BO answered with a 58-yard run down to the 2, but the Bulls weren't able to score a TD and had to settle for a field goal. With time running out in the half, Ohio drove to the 5, but a solid tackle by Najja Johnson and a sack by Steven Means kept the Bobcats out of the end zone. A field goal cut the UB lead to 7, 24-17 at the half.