Postseason Meal 8.3: The Hero of the Year

Share All sharing options for: Postseason Meal 8.3: The Hero of the Year

In the penultimate Postseason Meal, we honor the hero of the 2012 year...hope he didn't graduate.

HERO OF THE YEAR:

If I had to pick last year, it would have been Branden Oliver. This year Alex Neutz had a crazy season, fought through injury, adjusted to two different quarterbacks and was often double teamed. In a normal year he would be the clear hero of 2012.

But 2012 was not normal, in a season defined by injury, the Next Bulls In, were the true heroes in 2012. In particular, Joe Licata at Quarterback, Devin Campbell, Brandon Murie and Rashad Jean at Running Back and Derek Brim at Safety.

Those replacements played in 50 games and started 15, however their impact was much larger. 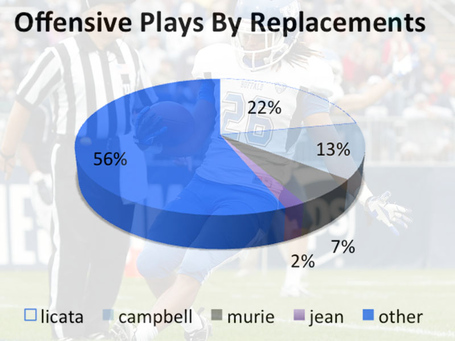 On the offensive side, the four replacements had the ball in their hands for 44% of UB's offensive plays.

With Oliver out, Campbell, Murie and Jean in Massachusetts were able to effectively maintain the UB run game. 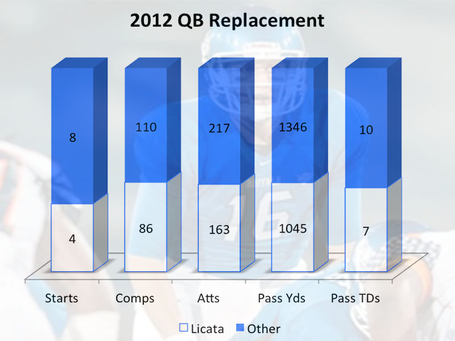 But 2012 may go down as the year UB found their next great Quarterback. Licata in 4 starts (granted against dubious competition), had passing numbers that are comparable to those of Zordich through 8 starts.

Most importantly, as seen by the title graph, the replacements compiled a .467 win percentage as starters while the rest of the team had a .333 winning percentage. Licata was 3-1 as a starter while Derek Brim went 3-2 after earning his way into a lead role in the secondary. 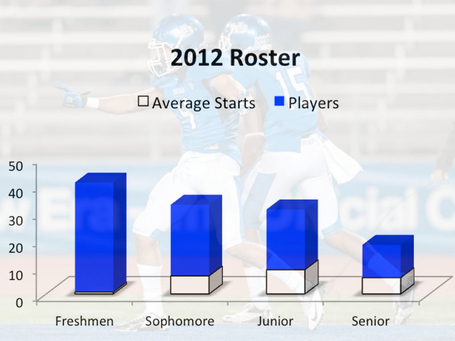 Talent cliff yes, shallow pool no. With 3 times as many Freshmen and Redshirt-Freshmen as Seniors, this team's best days could be ahead of them. UB lost a third of their starters to graduation, and the majority of returning starters will be Juniors and Seniors in 2013. Most of the 40 rising Sophomores will have no starting experience. The replacements are the exception, they will return Senior Brandon Murie, (3 starts in 2012), Junior Derek Brim (5 starts in 2012), and Sophomores Licata and Campbell (4 and 3 starts in 2012 respectively). With so many players, both experienced and not, fighting for starting spots, the battle to be the "Next Bull In" should be more intense than ever during Springball, and the result should be a stronger team in 2013.