Since I'm grossly encroaching on Basketball Season to beat the dead horse of UB Football '12...

Share All sharing options for: The Postseason Meal Part 5: The All-Basketball Football Team

Part 1
Part 2
Part 3
Part 4
Appropriate Music: Make'em Say Unhhh by Master P
During the rest of the postseason meals (there will be 8 total if you were wondering how long I was gonna do this) I acknowledge that it is basketball season, but I also acknowledge that I will continue to ignore basketball in favor of beating the dead horse that is 2012's football season.
I will do this by unveiling the 1st annual All-Basketball Football Team of the Year.
Today we unveil our "Center of the Year" and the "Flying Dunk Gorilla of Awesomeness of the Year"
Center: Foundation of the teams offense, the rock, the foundation.

Video and Audio via ubathletics
Center of the Year: Alex Neutz, with 65 receptions, 1,015 yards, 11 Touchdowns and 15.6 yards per reception, was our rock and the only receiver we could count on in 2012.
Flying Dunk Gorilla of Awesomeness: Necessary, probably not, but vital, yes. The flying dunk Gorilla is the cherry on top of a sundae, the M in HAM, the final "rack" of "racks on racks on racks."
Video and Audio via ubathletics
Flying Dunk Gorilla of Awesomeness of the Year: Najja Johnson and Cortney Lester, with 5 and 4 interceptions respectively, the pair finished 1 and 2 in conference in interceptions. Fun yes, but UB was only 2-4 in games where Johnson or Lester recorded an interception.
Bonus Chart: Most Intercepty Teammates (multiple players w/4+ INTS) 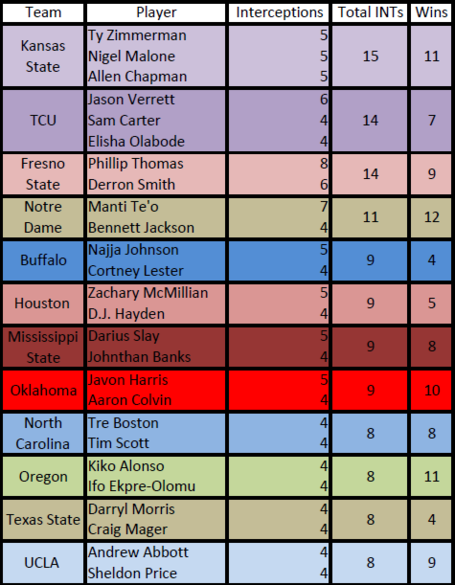 Goat of the Year #2: Lou Tepper

Defensive Coordinator Tepper has great stats for his resume:

Despite all those good stats, Buffalo fell victim to unlucky number 13.

How does a team in the top 25th percentile in sacks, interceptions, QB rating and yards per play allow so much on each completion? It must be that they were too aggressive and got beat for big plays? Nope.

UB stood in the top half of the conference in long plays from scrimmage allowed. We were actually too passive. Our stats are inflated by the amazing athletes we had on defense, but in the end, three man rushes, ten-yard cushions and letting each opponents best player move freely in soft zone coverage is the reason our defense looked way worse than the paper stats show.

That said, Buffalo improved defensively as the season progressed (and as the schedule softened), and we improved in every defensive category except forced fumbles and yards per pass completion. If Khalil Mack returns and Lester, Johnson, Sherry and Brim continue to gel as a defensive backfield, I hope Tepper feels comfortable unleashing Mack, Way and the front 7 by sending pressure often and disrupting the rhythm of the QBs we face. Only time will tell if my hopes will be fulfilled. Until then, Lou Tepper reigns as #2 Goat of the Year and he will probably spend his offseason reupholstering UB Stadium furniture. 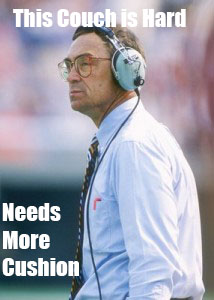