At least we are not Kansas or Cleveland.

Sixteen teams have tried, but only seven teams have won the MAC Championship. It is greatly ironic that the list of winners includes Akron and Buffalo. In 2005 and 2008 respectively, these teams peaked, and then crashed, hard. The rest of this article will talk about our futility, but let us first take this time to laugh at:

Those teams are awful, especially Ball State and Ohio.

The Ruined Weekend List: These fans have had bad Saturdays and Sundays the past 3 years:

And the most miserable football fan base of the past 3 years:

Out of the bottom 12 NCAA teams on the list:

Only time will tell if the loyalty play will work for Buffalo, UNLV and maybe NMSU.

Predictably, Marv Levy, the head of the Super Bowl era, is #1. Lou Saban, the coach of the two-time AFL Champion Bills is #2. Also in the top six, UB legends Dick Offenhamer, Jim Peele and Bill Dando. At #5, the under-appreciated Wade Phillips.

If Buffalo had a Mount Rushmore of football coaches, I think today it would include: Levy, Saban, Offenahmer and Gill. That said, Gill finished at #12 on my list, ironically sandwiched between hated Bills coaches Dick Jauron and Mike Mularkey. Gill didn't win as many games as he could have in 2007 and 2009 to really cement himself as a legend. He was also hampered by the 2-10 season in 2006. However, Buffalo respects the postseason, and Gill is the first coach since Levy to win a postseason football game for Buffalo. 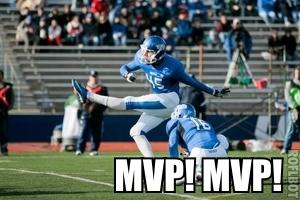 Yes, there was Gerogia, and Ohio, and many 20 yard punts and closely missed field goals, and the botched field goal attempt against Miami, a few dropped punt snaps, many muffed kick returns, but ignore all of that. UB Special Teams proved to be our hero this year.

It started against Toledo. In that game, Clarke missed his only attempt, but it looked pretty good from where I saw it. UB's kick block team blocked two extra points and Toledo missed a 3rd to turn what should have been a 14-point game into a more managable 11-point game. Tyler Grassman had the game of his season, averaging 34.5 yards per punt and he punted 10 times. Buffalo also held Toledo's dangerous special teams unit to one punt return for a loss of six yards, and only a 14 yard kick return average.

Against Miami, special teams made a few amazing plays to seal the victory. First a botched snap turned into a great play as Tony Daniel found Alex Dennison for a first down. Buffalo's offense came back on the field and scored a touchdown. After Miami tied the game with only 23 seconds remaining, Devin Campbell returned the ensuing kickoff 47-yards. This set up Patrick Clarke with the opportunity for a 47-yard game winning kick. He buried the kick to give Buffalo their first win over a FBS team in 2012.

The following week, Buffalo struggled in the red zone: drives stalled at the 13, 14, 18 and 21 yard lines. Fortunately, Clarke was 3-for-4 on the day giving Buffalo 9 needed points. In addition Tyler Grassman out punted WMU's punter, Grassman had 8 punts that averaged 38.4 yards, to Schroeder's 7 punts that averaged 33.9 yards.

Finally, as the Bulls struggled inexplicably in Foxborough, a blocked punt changed the momentum. Kyndal Minniefield returned the block for UB's first score of the day and sparked a 29-6 second half run to give Buffalo their 3rd straight victory.

Despite all the shortcomings of UB's Special Teams Unit over the past two years, they came up big in UB's 3 MAC wins and thus they are the season's 3rd hero.