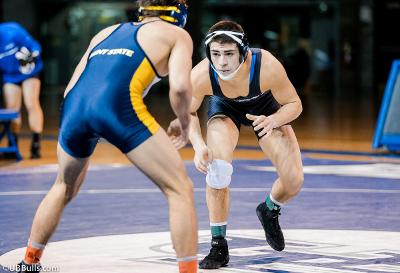 This weekend UB travels to College Park, Maryland to compete in the Terrapin Duals, where they'll wrestle essentially back-to-back dual matches on Sunday. They face the host school (Maryland) and Davidson. Below is a brief overview of UB's opponents along with a few of their key wrestlers.

Maryland's 2014-2015 record may fool some people. Last year's squad rattled off four straight out-of-conference wins to begin the year, but finished 5-15 overall - mainly due to the fact that they went 0-9 in the Big Ten Conference. As John will tell you, the Big Ten is the toughest wrestling conference in the nation (followed by the MAC). All five of their wins came at home.

The Terps graduated five seniors, most notably NCAA-qualifier Spencer Myers at 285 pounds, but in their place step up five more seniors and a handful of talented underclassmen. It's difficult to project both UB's and Maryland's starting lineup, being that this is the first match of the year, but Maryland touts four top-30 wrestlers throughout their lineup. This matchup should be a tough early-season challenge for the Bulls and it will be interesting to see if Stutzman tweaks his lineup to test certain grapplers. Let's see how UB matches up with the Terps' top wrestlers:

(Rankings are per wrestlingreport.com - this is one of the few sites to list top 30 rankings - most only do top 20 or top 25)

Alexander, a redshirt senior, has had an impressive career thus far at Maryland. He led the team last year in dual wins (11) and was ranked as high as 7th in the country. If the Blue & White match results stand, Bryan Lantry will face Alexander at 133. Lantry, a redshirt sophomore, went 26-9 for UB in open competitions last year and looked impressive during the Blue & White scrimmage.

Bannister went 37-4 in open competitions for Maryland last year. The redshirt freshman holds the Maryland high school record for most wins along with a slew of other honors, and will be looking to make his first official collegiate year a memorable one. If the Blue & White match results stand, redshirt sophomore Jason Estevez will try to overpower the strong, compact Bannister. Estevez had a solid campaign last year which included 7 dual meet victories.

Mascola enters his redshirt senior year as one of the most experienced wrestlers on Maryland. He won two matches in last year's NCAA tournament which included an upset of then 5th-ranked Cody Pack of South Dakota. Tim Schaefer is the projected starter at 157 for UB. Schaefer, a redshirt sophomore, amassed 261 wins in high school for Warsaw, NY. Assuming that he'll start this weekend, it will be interesting to see how he matches up against one of the top wrestlers in the Big Ten.

Davidson, much like the Bulls, is a young team. They have two seniors and one junior on the roster - the rest are freshmen and sophomores - and none of them are ranked in the top 30. Last year they finished the season 6-15 in dual matches, and 1-6 in the Southern Conference. 2 out of their 6 victories came at last year's Terrapin Duals (vs. Johns Hopkins and Div. II Alderson-Broaddus). UB and Davidson shared four common opponents last year. Both teams beat Campbell and lost to Gardner Webb, but UB went on to beat Appalachian State and Sacred Heart - whereas Davidson lost to both teams.

UB and Davidson are in similar rebuilding stages - they are both loaded with underclassmen - but UB should have the advantage in this matchup. Davidson's top returners are at 133 and 174.

Runzo, a two-time state champion from Virginia, had five victories as a freshman last season for the Wildcats. He wrestled the majority of last season at 141 lbs, but is back down at 133 this year.

Powers had 12 wins last year and enters this season as one of the two seniors on the roster. He went 1-2 at the SoCon Championships to finish his junior season. For UB, 174 lbs will feature either MM (Muhamed McBryde) or Austin Weigel. MM beat Weigel 3-1 in their Blue & White match.

I've seen reports on different start times for the matches so I'll hold off on giving exact times for each contest. It should be a good weekend for UB to gauge where they stand in the early part of the season, and it will give Coach Stutzman an opportunity to evaluate his lineup against outside competition. And from what I understand, Matt will have a chance to see our Bulls in person.