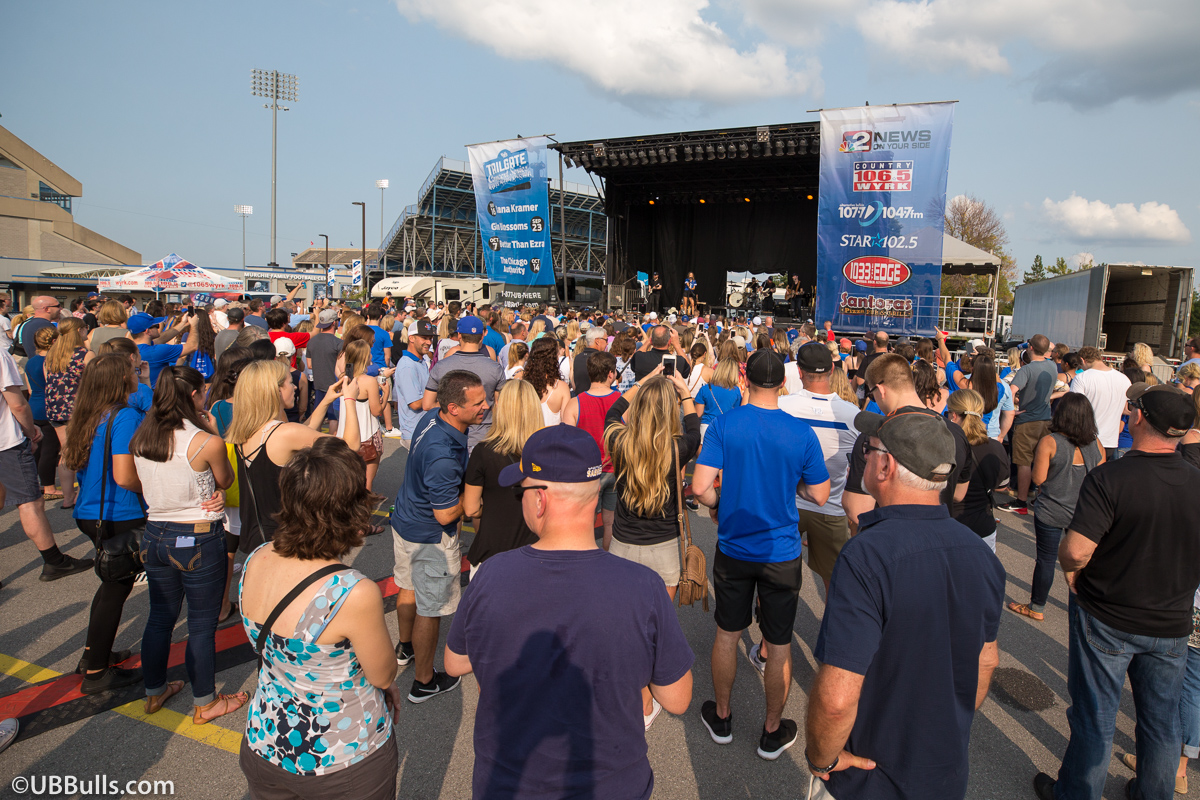 Over the past six years, the UB Athletics department has steadily improved the game day atmosphere for UB football games. If you have not been to a football game in a while, or are a visitor, here's everything that you'll need to know for game day.

Prior to the Game

UB is the only Division 1 FBS school that I know of that provides all general football parking completely free. 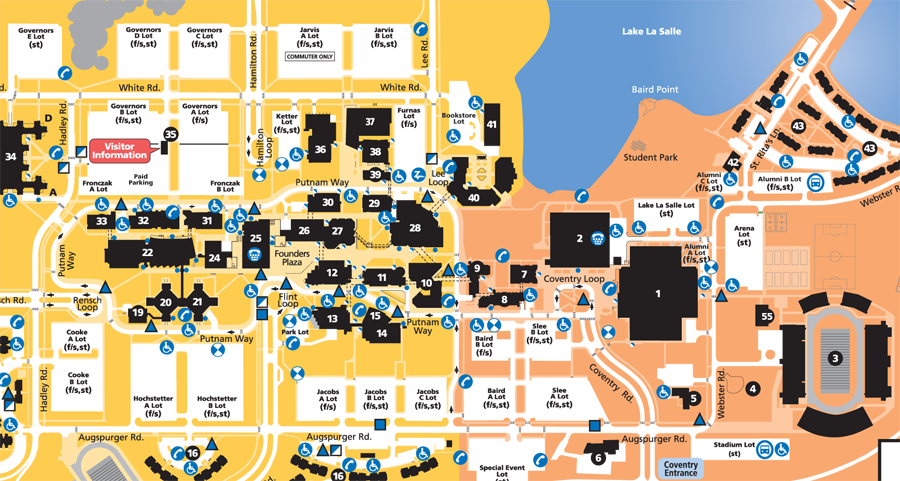 Generally, most fans park in the lots along Augspurger Road, west of UB Stadium (3). It is worth noting that Augspurger Rd is closed to public traffic east of Coventry Rd.

If you require handicapped accessible parking, park in the Slee A Lot, just west of Coventry Rd. A shuttle will pick you up at the corner of Augspurger and Coventry and bring you to the game.

I typically see the most tailgating in the Special Event Lot, which is where you should park if you are bringing an RV, and the Baird A Lot. Otherwise, the lots along Augspurger Rd generally fill east to west. If you are arriving late or if the game is particularly popular, even the Cooke A/B lots may fill up.

The only lots that I can think of that are off limits are apartment lots (16, 43, and west of Hadley Rd), which require a permit 24/7, and the Bookstore Lot, which has a one hour time limit. Lake La Salle Lot hosts the student tailgate, so you will not be able to park there, and the Stadium Lot hosts Stampede Square, which we will get to later. The lots along Webster Road are for donors only.

If you need to get in and out easily, I find the Furnas Lot north of the Student Union (28) one of the easiest to leave. You can also park along Amherst Manor Rd, south of the Coventry Entrance, for a quick getaway. For popular games, the Baird and Slee Lots may take some time to get out of.

UB has a few rules for tailgating, but the rules are very reasonable. Alcohol is allowed (this is Buffalo, of course), however glass bottles are discouraged, and kegs are prohibited. I think the biggest rule to remember is that this is a Buffalo Bulls tailgate and not a Buffalo Bills tailgate. You will not see intoxicated people backflipping onto flaming tables, you will see families enjoying some food and beverages together before the game.

Single game tickets for UB football games are $30 for any seat in the stadium, excluding club seats. However, there are some ways to save some money on tickets.

If you plan on buying four or more UB tickets this year, whether they are all for one game, or you plan on attending four UB games solo, the MoBull pass is for you. You can buy 10 tickets for $100, which are good for home football, women's basketball, men's basketball, and wrestling games. You get to pick the games, but UB will pick your seat.

As with most other college football games, you may see scalpers with signs that say "I Need Tickets." I have never bought from a scalper so I do not know what their typical price points are, but that is an option. Stubhub typically has tickets more expensive than the box office. 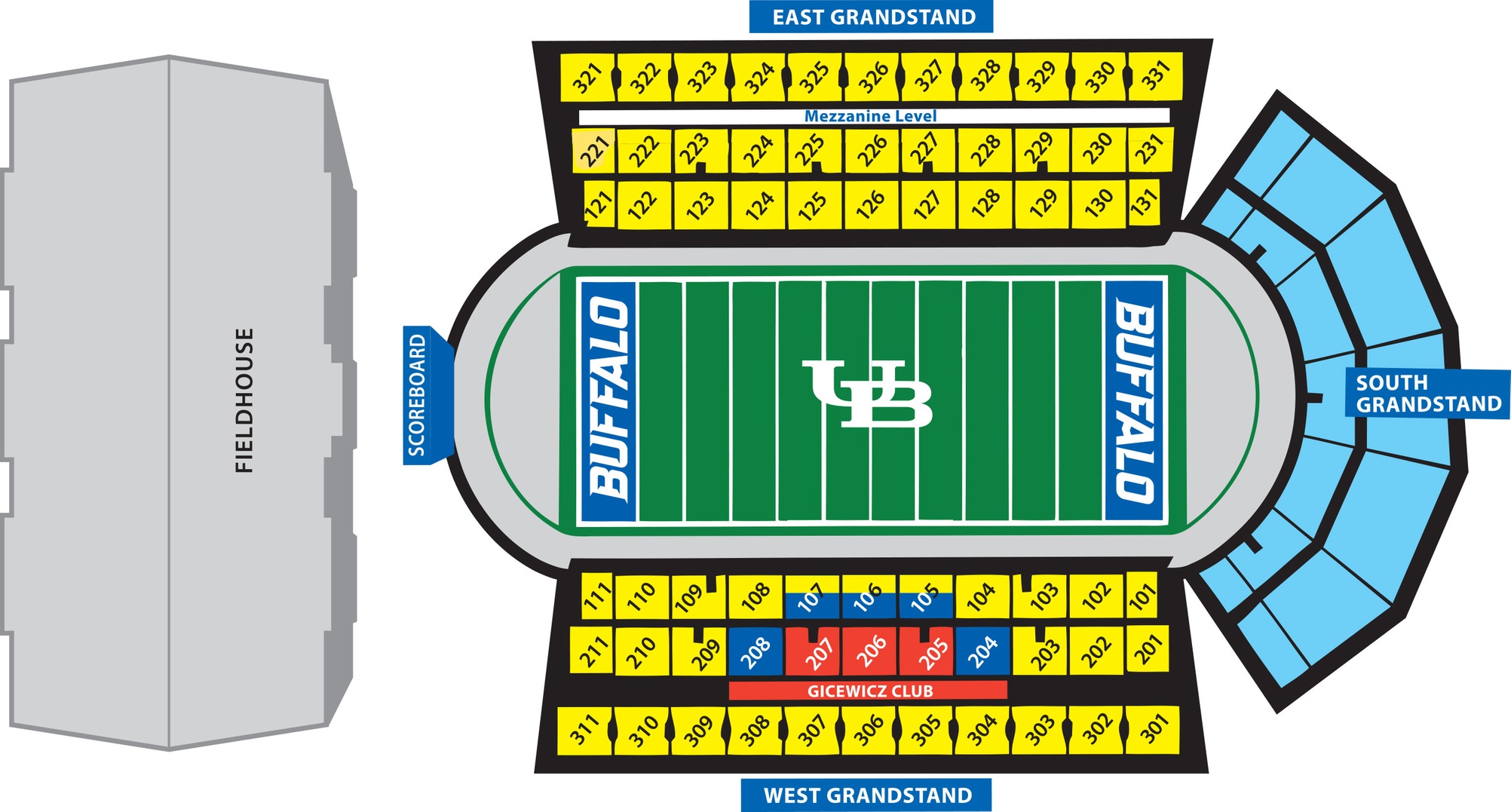 Gates open to the stadium 90 minutes before kickoff.

Both the east and west grandstands have concession stands, which serve your typical football foods - hot dogs, hamburgers, pretzels, and pulled pork. You can get some kettle corn at a stand just inside the stadium's south entrance. I find the prices to be reasonable but the food quality is nothing impressive. Beer is not sold to the general public at UB Stadium. **Updated for 2019: Beer is now being sold at UB stadium.

In the east and west grandstands you can pick up some UB gear. However I find the UB team store (inside Alumni Arena) and Campus Tees (inside the Student Union) have better prices.

Game programs are free. Pick one up at any of the entrances.

Unlike many other college marching bands, the Thunder of the East does not have a formal concert before the game, however they typically warm up around the south east parts of the stadium.

The Thunder of the East performs a pregame show approximately 20 minutes prior to kickoff then forms a tunnel when the team enters the stadium. During the game you will hear the band play the UB fight song "Victory" after scoring plays, and an abbreviated version "Victory Short" on first downs and turnovers. On third downs, you will hear Holst's "Mars: The Bringer of War." You'll also hear an up-tempo version of "Also Sprach Zarathustra," and a variety of pop songs.

The Thunder of the East typically plays to the west grandstand at halftime.

After victories, the football team walks over to the band as they play "All I Do Is Win" by DJ Khaled.

Throughout the stadium and along the sideline, you may see the number 41 or the phrase "All 41." This is a tribute to the late Solomon Jackson, a UB linebacker who tragically passed away in March 2016.