Share All sharing options for: 12 days to kickoff: Chris Merchant

Outlook: Is currently the #3 QB, unlikely to see action this year but will be in a battle to impress coaches for next year's QB competition.

The 1-7 Bulls faced the 4-4 Redhawks at home in Joe Licata's first start at UB. Licata was nothing special, but he brought stability to allow UB to win, Branden Oliver did the rest. 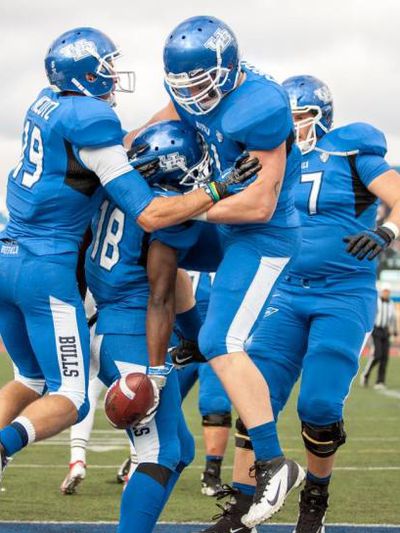 After 6 consecutive losses, the Bulls win an exciting game over the Miami Redhawks.

In UB's first drive of the second half, BO ran 6 times for 51 yards including a 5-yard TD to give UB a 10-3 lead. Miami answered with a TD and suddenly the sloppy defensive battle became a classic MACtion shootout. Licata found Alex Neutz for a 43 yard TD pass to put UB up 17-10. Miami answered with a 13 play 75-yard drive to tie the game at 17. Following a UB punt, Lee Skinner forced a fumble that gave UB the ball back. The Bulls moved to the 32 where they were going to attempt a 49-yard go ahead field goal.

Backup QB Tony Daniel took a bad snap but was not able to get it down for the kick. He stood up rolled out and found Alex Dennison for a 10 yard pass and a first down. In addition Daniel took a roughing the passer penalty, which moved UB to the 11. Two plays later, UB scored a TD on a Licata to Fred Lee TD pass.

Miami went on another epic drive, 16 plays with a conversion on 4th and 4 and 4th and 20, to tied the game with only 23 seconds remaining. On the ensuing kickoff, Devin Campbell returned the kickoff 47-yards to the 35. BO ran for 5 yards to give Clarke a little help, BO ended with 199 yards on 32 carries. With time running out, Clarke nailed the 47 yard field goal to give UB the 27-24 win.