It wouldn’t be fair to refer to UB Volleyball as "The Tahleia Bishop Show". Buffalo used two strong all-around team performances to sweep both Bowling Green on Friday and Miami (OH) on Saturday. But if you left Alumni Arena either night thinking Bishop stole the show, no one would argue with you. 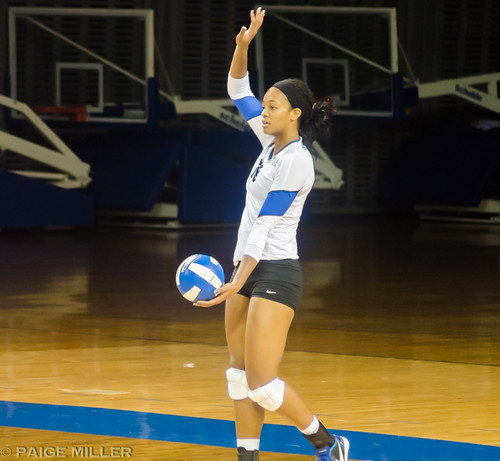 Bishop had 18 kills against Bowling Green (a huge number for a three-set match) and then another 18 kills against Miami, including the match-winning points in both matches. She poses great problems for opposing defenses: she probably gets more altitude on her jumps than any other player on the team, and more velocity on her hits than any other player on the team. She also effectively mixes in tip shots over the blockers, roll shots and back-row attacks.

Bishop, a junior outside hitter from Whitby, Ontario, was the first Bull ever to be named First-Team All-Mac, a year ago as a sophomore. And she’s playing even better this year. Her statistics are up in most categories compared to last year: kills per set (4.67 this year vs. 3.67 a year ago), hitting percentage (.256 versus .244 a year ago), digs per set (2.98 this year vs 1.68 a year ago) and total points per set (5.1 versus 4.2 a year ago). Her 4.67 kills per set leads the MAC so far this year. If she keeps playing like this, she should not only be the first Bull to ever be First-Team All-MAC two years in a row, but she has to be considered for MAC Player of the Year (an honor which would also be a first for a UB player).

Certainly, Buffalo had other players making strong contributions. Against Bowling Green, Buffalo trailed only once in the entire match, at 1–0 in the second set. Buffalo took early leads in each set against Bowling Green, and was only challenged in the third set, in which Buffalo showed great determination to hang on and win 25–23. In addition to Bishop’s 18 kills, Buffalo got eight kills from junior middle blocker Akeila Lain and seven from junior outside hitter Megan Lipski. Junior setter Marissa Prinzbach had 31 assists to lead Buffalo to a respectable .242 team hitting percentage. Freshman libero Niki Bozinoski and Bishop each had a team high 9 digs.

Against Miami on Saturday night, Buffalo had to come back from large deficits in all three sets. In the first set, Buffalo fell behind 6–1, and their only point was on a Miami service error (in other words, Buffalo hadn’t done a single thing to earn a point). But instead of calling a timeout here, Buffalo coach Reed Sunahara let the team settle down by themselves, and Buffalo responded with an 8–3 run, tying the set at 9–9. From there they would increase their lead to five at 19–14 and eventually win the set at 25–18. No one player really stood out, and everyone on the court made solid contributions.

In set number two against Miami, things looked bleak for Buffalo. They trailed 22–15, when coach Sunahara went to his bench and inserted freshman Sklyer Day into the lineup for the first time in this match. Day, from Minooka, IL, had started the season on the injury list, and didn’t even appear in a match until UB’s 13th match of the season, against Western Illinois on September 20. And since then, she has become Sunahara’s top choice to sub in at outside hitter or right-side hitter. Sunahara’s confidence in Day was rewarded on her first point, as she and Lain blocked a Miami shot for a UB point. Day then served tough for the next four points, and Buffalo had a 5–0 run and the score was 22–20 in favor of Miami. Buffalo would then get solid back-row defense and great hustle running down balls from Day and senior Sable Staller, back-to-back kills from Bishop, an ace from Prinzbach, and a kill from junior middle blocker Amber Hatchett would finish the set at 26–24 in favor of Buffalo. That would be the only court-time Day would see during the match, but in that time Buffalo outscored Miami 11–2. 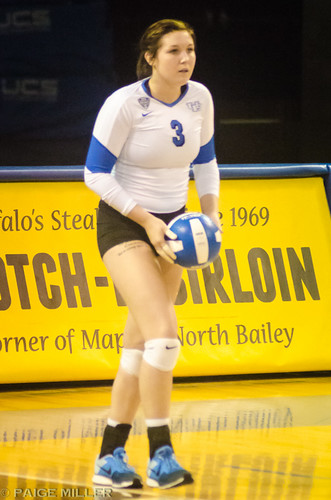 The third set began with Miami racing out to a 4–1 lead, but then a kill by Bishop helped ignite the Bulls offense. Freshman Tessa Ooyama would sub in to serve with the score 6–4 Miami. Ooyama, from Fairport, NY, has been used exclusively as a serving specialist this year, and her tough serves and three straight blocks by Lain and senior right-side hitter Sable Staller gave Buffalo an 8–6 lead. Miami wouldn’t go away, and with the game tied at 18–18, a kill by Bishop following a beautiful out-of-system bump set by Prinzbach would give Buffalo the lead. A tip by Bishop over the Miami blockers would give the Bulls a two-point lead, and Miami called time out.

Lipski stepped to the service line, sent the ball to Miami’s back right, and it could not be returned. Ace for Lipski. Then, following the instructions of Buffalo assistant coach Donald Gleason, Lipski served the ball short to the area where Miami 6’5" middle blocker Jenny Ingle was. Serves almost never go to middle blockers, and middle blockers almost never return serve. Ingle was caught by surprise and made no effort to contact the ball, and Miami watched the ball fall untouched to the floor, about 12 feet from the net. Back-to-back aces for Lipski! 22–18 Buffalo.

Again Gleason instructed Lipski to serve to the same spot, and Lipski’s serve went there. Ingle this time realized it was her responsibility to return that serve, hit the ball weakly towards the net, where Bishop pounded the ball back onto the Miami side of the court. 23–18 Buffalo. Time out Miami.

When short serves are successful, teams normally instruct back row players to rush in to return the serve, and that’s what Miami did out of the time out. Lipski again served the ball towards Ingle, but a back row player rushed in and returned the serve, Miami would get the point on a kill by Ingle. On the next point, Miami’s Olivia Rusek sent a bullet over the net, but right at libero Bozinoski, who made a perfect dig, the pass went perfectly to Prinzbach and Bishop’s attack was dug by Miami, but an attack error by Miami put the score at 24–19 Buffalo.

After another kill by Miami, Bishop tried tipping the ball over the Miami blockers, and it looked like it might be the winning point, but Miami pancaked it up and was able to send a free ball over the net. A perfect set by Prinzbach led to Bishop taking a full swing, and the ball rocketed to the floor, untouched. Sweep for Buffalo.

Bishop would lead the team in kills with 18, and in digs with 14. Bozinoski had 13 digs. Buffalo had 13 blocks, with Lain leading the way with 10 blocks, and setter Prinzbach had 6 blocks.