Observations at Other Schools

Two weeks ago, I made the short drive from Buffalo to watch the UB Bulls take on the Old Dominion Monarchs in Norfolk, Virginia. However, since the UB game was in the evening on Saturday, I decided to go to the Charlotte 49ers vs Middle Tennessee State Blue Raiders game the prior night to check out how the 49ers have been doing since we last played them in the 2019 Bahamas Bowl.

A little refresher on Charlotte football. In the 1940's Charlotte had a football team for only a few years, and through student effort in the 00's Charlotte returned to the field in 2013 as a FCS team. In 2015, Charlotte moved up to FBS. Since 2013, Charlotte has had one winning season and has a 34-60 record. Buffalo's record through the same amount of seasons after moving to Division 1-A in 1993 was 24-66.

Overall, the Charlotte 49ers athletics program is similar to the Buffalo Bulls' program. In a larger lens, both schools are located in mid-sized metro areas (coincidentally both have the nickname "The Queen City"), and are competing with professional sports for fans. Both schools have about 30,000 enrollees, a small amount of out of state enrollees, and have a large commuter population. Buffalo is a smaller metro area than Charlotte, but Charlotte has experienced a large population growth which may bring a lot of non-natives, and non-graduates, to town. Charlotte's football program has little to no history, and is building a fan base.

Onto the game. Knowing some of the history of the program, I wasn't expecting to be too impressed with the game day experience. The tailgating that I walked through confirmed my suspicions, as it seems like most of the parking on the Charlotte campus is in parking structures. However, after walking through the gates of Jerry Richardson Stadium, my opinion changed. The 15,000 seat stadium, finished in 2013, is one of the nicer stadiums I've been to. Concession stands are a short walk to the seats, the video board is modest but useful, and seemingly every seat in the house has a great view of the game. The stadium was not full, however the students filled much of their assigned seating along the visitor sideline. The non-student turnout was decent for a Friday evening, but was light in some of the end zone seating.

As the game progressed, I became increasingly impressed at what was built at Jerry Richardson Stadium, but more at the fanbase than the stadium (which I was still impressed with). At schools like Penn State, West Virginia, Virginia Tech, and Marshall, there is an interactive call and response cheer where one side of the stadium shouts one part ("We Are") and the other side shouts the remainder ("Penn State"/"Marshall"/etc). This is usually coordinated by cheerleaders holding up signs on the field. At Charlotte, the chant ("Forty"/"Niners") was loud and only appeared to be coordinated by the video board in conjunction with a few members of the Charlotte football scout team waiving their towels. Penalties against Charlotte, correct or incorrect, were met with a stadium full of booing. The Pride of Niner Nation Marching Band was audible throughout the entire stadium. Did I mention that this was a Friday evening game against Middle Tennessee State University, a school that is not only a directional school but the direction is Middle?! In less than a decade Charlotte had a more vibrant football culture than UB has after nearly three decades in Division 1.

Saturday's UB Bulls vs Old Dominion Monarchs turnout likely would have gotten a similar reaction from me if not for the night before. A newly renovated stadium brought out a mostly capacity crowd, despite a tepid student turnout. Old Dominion University's football team has the benefit of not having top level professional sports to compete with, but has the disadvantage of being absolutely terrible at football. After joining Division 1 in 2009, Old Dominion experienced success on the field, posting a winning record in all five seasons in FCS. However, after joining FBS in 2014, Old Dominion has only had one winning season, and has not won a game against a FBS school since 2018. Despite declining success on the field, a program that is younger than every player on the roster, and the Buffalo Bulls (not Bills) in town, the general public still showed up.

What amazed me most about these two games is the public attendance in schools so similar to UB. Mid-sized city, teams that do not have a lot of history, and less than stellar results on the field. I could understand why Appalachian State, located in Boone, NC with a population of 20,000, can fill Kidd Brewer Stadium with 30,000 people. Appalachian State has had nothing but success in the last 30 years.

When I first stepped onto the field at UB Stadium prior to a game versus Stony Brook as a member of the Thunder of the East Marching Band ten years ago, I was surprised. I knew coming to UB that UB was Division 1, but did not fully understand the FBS/FCS split, and knew that UB was not Penn State. The giant stadium intimidated me and the crowd seemed large (it was not as large as I thought it was). But the thing that surprised me is that the stadium seemed quiet. There were a ton of students on the east sideline, but on the field they didn't seem loud. Once the game started and I was in the stands, the fans on the other side of the stadium might as well have been in a different zip code. The large stadium that seemed so intimidating hours ago had not lived up to my expectations.

In the past ten years, I have since attended games at over 30 different stadiums. Some have had amazing atmospheres, and some not so much. However, with the exception of the Carrier Dome, UB Stadium has by far the worst fan experience. Why it sucks can be summarized as distance, viewing angles, and scoreboard.

However, one thing that makes UB Stadium suck is the distance from the closest seat to the field. UB Stadium has the track, as UB Stadium is a track stadium with an ancillary football/soccer field. The only other school in the conference that has this issue is Eastern Michigan. If UB wants to have an intimidating atmosphere, the seats need to be closer to the field. I've gone back and forth on how to solve this because of the stadium's current configuration. Seats closer to the field either means moving the field close to one of the grandstands (and therefore not having a fieldhouse that is centered to the field) or lowering the field and adding more seating. I'm leaning towards this costly solution.

This is the biggest reason why UB Stadium sucks. Besides having the eight lane track, the angle between the average seats and the field is so shallow, that it is hard to see what is happening on the field. Take the following pictures from Kidd Brewer Stadium (Appalachian State), which has similar dimensions as UB Stadium. 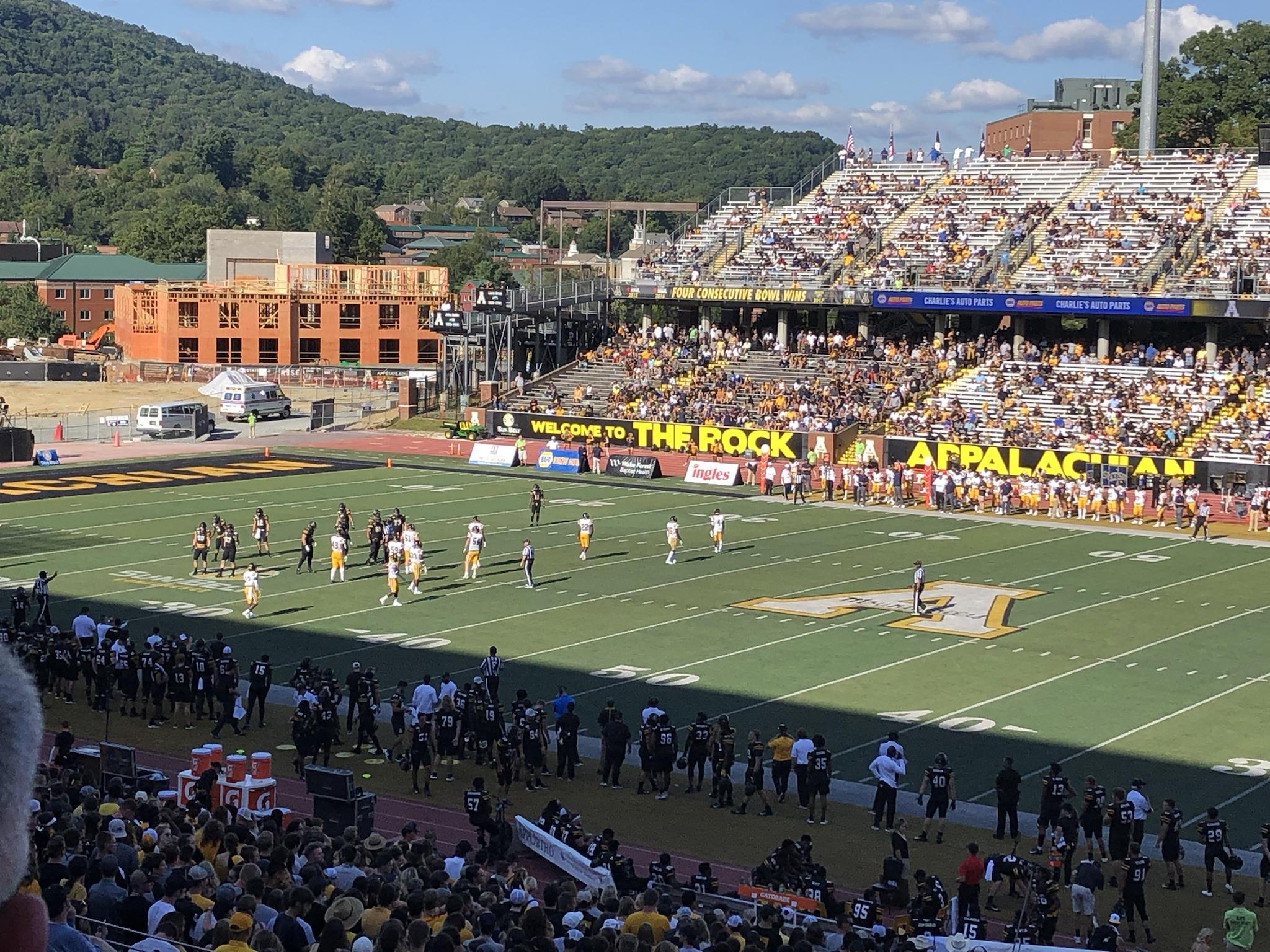 Despite having an eight lane track, the stadium actually has some impressive sight lines. Some of this is because the angle that the grandstand I was in is extremely steep. The other part is because the stands are right up against the track, where at UB Stadium, there is what I call "bonus track" which is the grey pavement between the track and the stadium. You can see it very well in this picture.

Looking at these angles at UB Stadium: 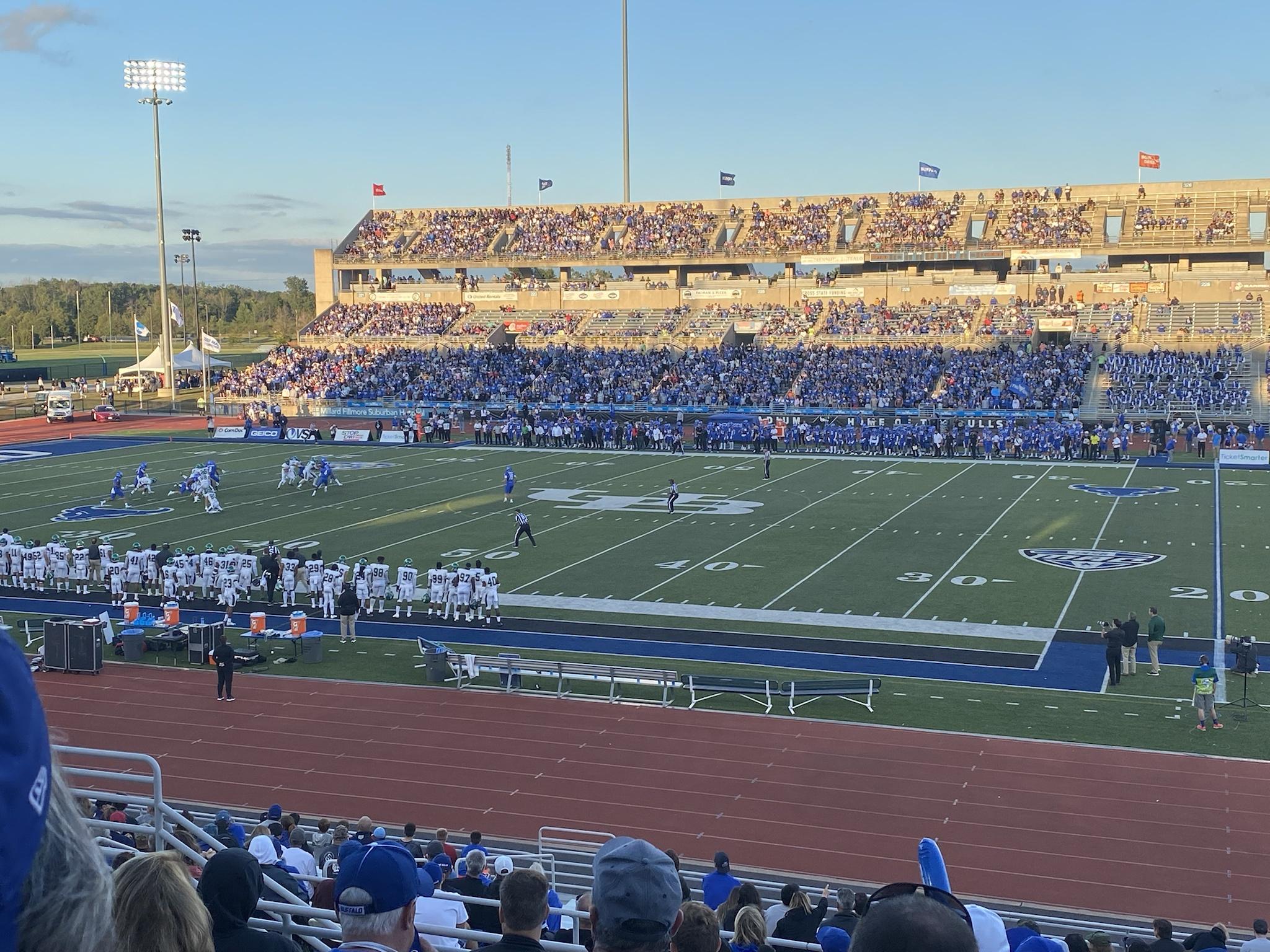 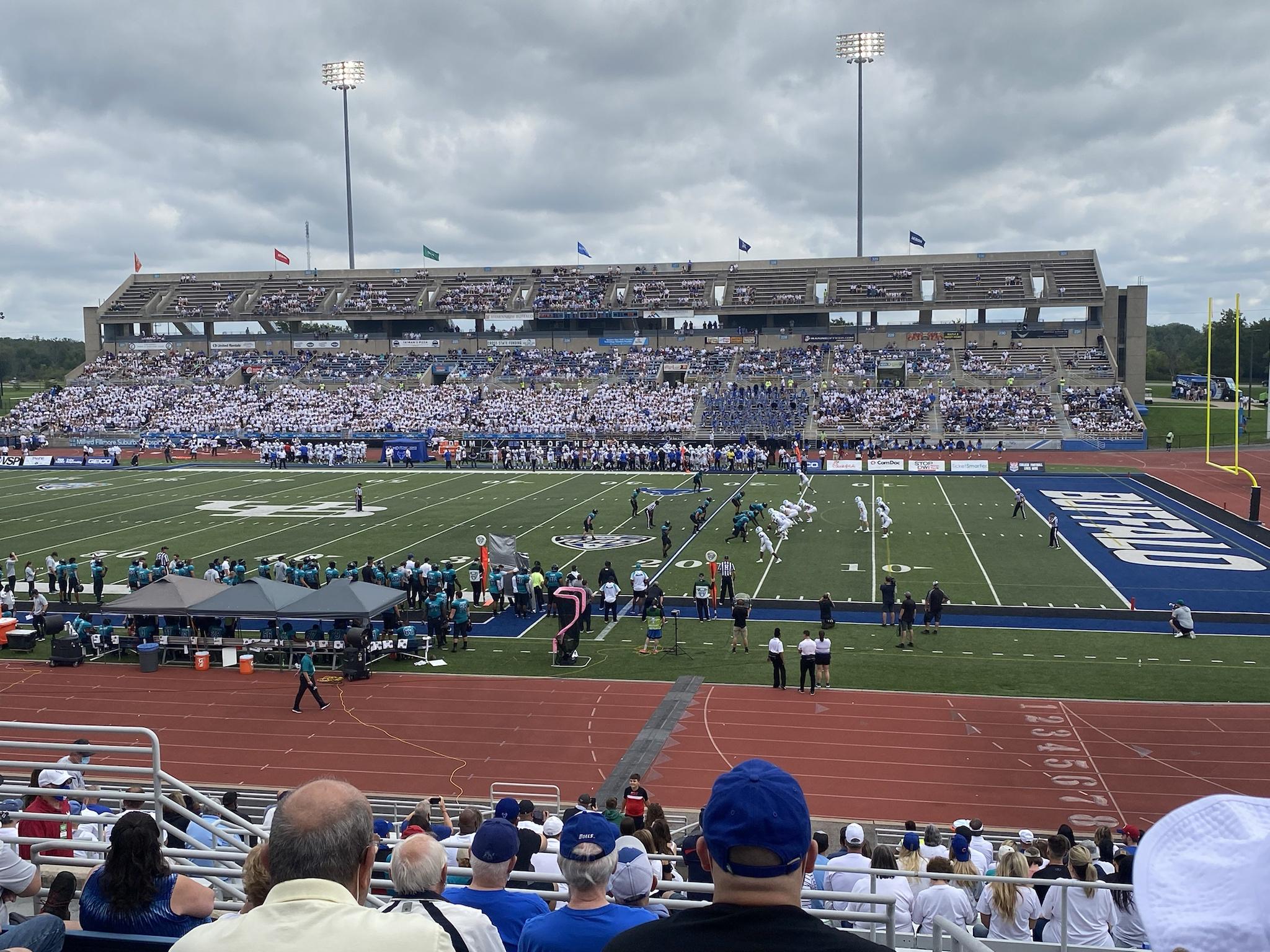 The second picture at UB Stadium is similar to the view at Appalachian State, but when trying to see what's going on downfield is hard at UB Stadium. Remove the track and it looks even better. 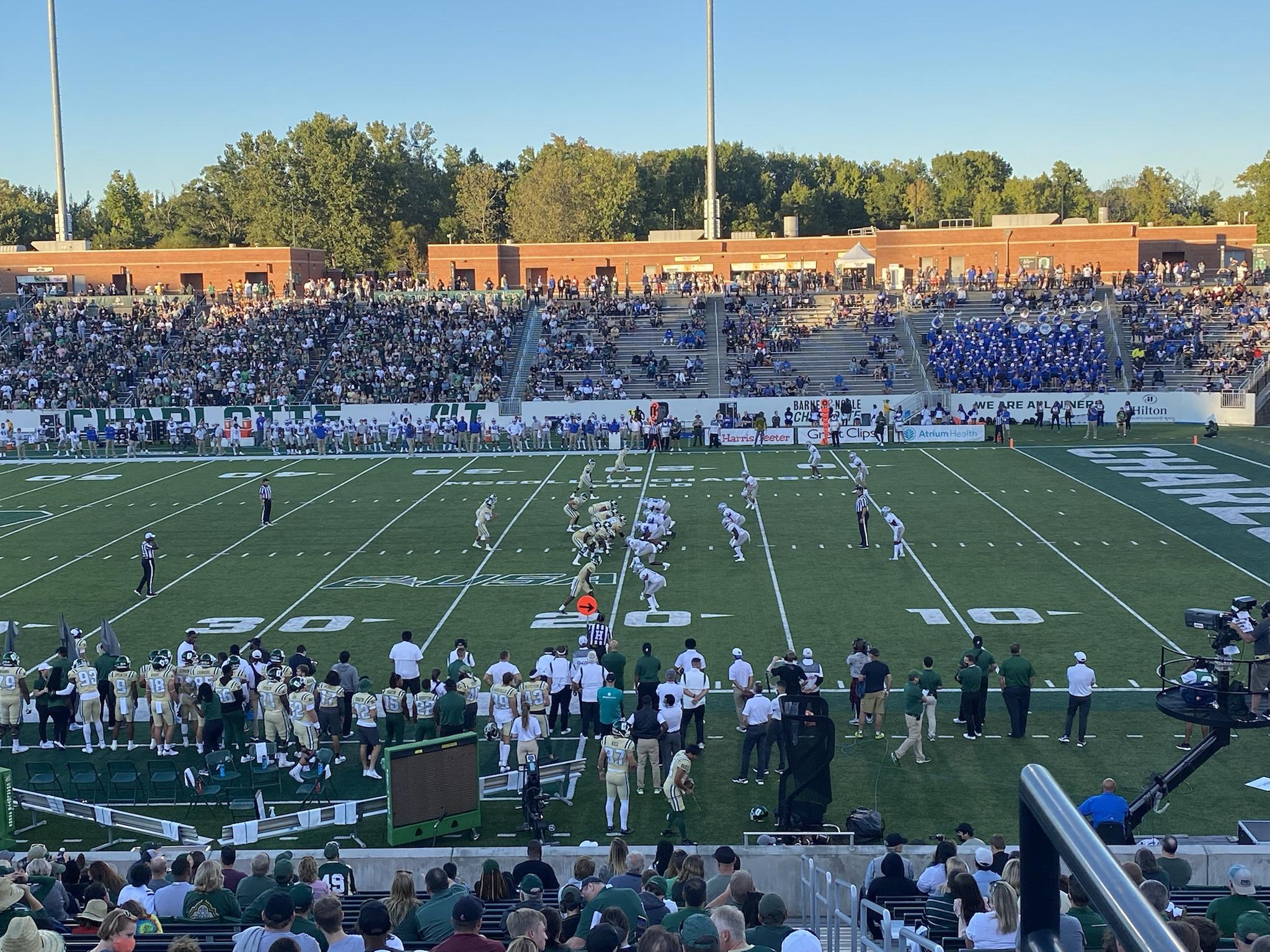 In both Charlotte's and Appalachian State's stadiums, you can see a 5-6 foot wall between the first row of seats and the field level. UB Stadium's drop is much shorter. This makes sitting in the first few rows of seats at UB Stadium an awful experience unless you like looking at the backs of football players and staff.

It's too far away that it might as well not exist

It has a ~30 foot diagonal, which is one of the smallest in FBS

The resolution is 288 x 272, so bad that it might as well not even play replays

No out of town scores or additional statistics, since it's too small

What Others See as the Problem

In September, I came across a post on the Buffalo subreddit called "Why doesn't UB football get a big crowd?" The majority of the responses were along the lines of stadium sucks, UB doesn't play top opponents, pro football town. I don't buy the second and third, because a metro area of over a million people should have enough interest to put 20,000 people in a stadium six times a year. In addition, UB played a top 25 team with a lukewarm general public turnout. The thread is worth a read, but my favorite comment included the following.

Fourth I think it’s even partially the fact that it’s known as UB. In reality, it’s the big state school and is analogous to Michigan, penn state, Ohio state, etc. I know a few years ago they tried to rebrand and focus on the "state university of New York" but it never really took. University at Buffalo doesn’t have the same prestige.

Part two will have the solutions.