32 teams entered and one beat them all!

Share All sharing options for: MunchMadness - Bocce Club Pizza is your champ!

Started over two months ago MunchMadness sole purpose was to crown the best eatery in Western New York. The fans have voted and congratulations to Bocce Club Pizza for taking down all comers and standing on top of the MunchMadness mountain! 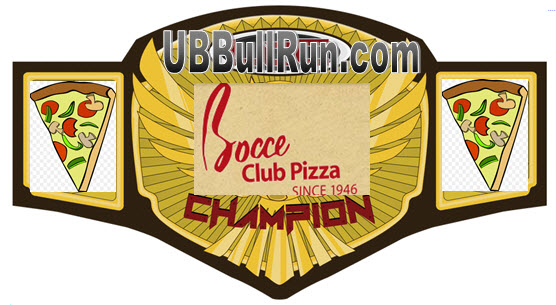 Bocce Club vs. Anchor Bar.   The first match-up of MunchMadness and my bracket was already ruined.  I apologize to Bocce as I picked Anchor Bar to eat it's way through to the second round.  I never made that mistake again. Bocce club defeated the most well know restaurant Buffalo has.

Bocce Club vs. Brennan's Bowery It was a shame that these two fine establishments met so early in the contest. A heated contest that Bocce Club eventually pulled away and won.

Bocce Club vs. Chiavetta's BBQ This could very well have been the final as well.  Two very loyal and passionate fan bases came out to support their favorite.  So Buffalo's top five foods are Wings, Roast Beef, Hot Dog's, Pizza, and Chiavetta's chicken (in no particular order.)  The fans proved that to be true.

Finals - Bocce vs. Ted's What a tough match-up and everything that Vince McMahon would have wanted for a WWE pay per view.  We had two heavy weights who plowed throw the competition and took down some serious contenders.  Ted's took down social media King Lloyd, Lewiston's Carmelo's, Buffalo Chop House, and dark horse to win with a rabid fan-base Dick & Jenny's.   We had controversy, we had a polarized fan base, we had legacy (Ted's 1927 & Bocce 1946),  we had two establishments that really wanted to be king, and a great turn out.  Bocce Club takes the crown with 52% of the vote.

This may prove that Buffalo is a hot dog & pizza city vs. being the 'king of wings.'   I will put Buffalo's hot dogs and pizza against any other city in America.

I spoke with Mark Daniels, the GM of the Bailey location from Bocce Club Pizza to congratulate on the win.   Mark wanted to make sure how appreciative Bocce Club is to all the fans who supported Bocce Club, not only in the Buffalo area put all across the US,  and honored to win MunchMadness.  Speaking with Mark, they have totally embraced technology and ZMOT Marketing.  On Facebook alone, had over 17,000 page views on their site for the finals against Ted's.

When I thought of a pizza joint, I think of the big silver ovens, a couple of friars, and a slide open refrigerator for drinks.  How wrong I was.  Bocce has online ordering instead of calling, a Facebook and Twitter presence, they ship orders Monday through Thursday over night to anywhere in America. I need to send some pizza to my brother in law in North Carolina.  Their phone app was not up to par so they are looking to replace and totally upgrade.  Wait, a pizza restaurant not satisfied with their phone app.  Mark states he hears often from returning proud ex-Buffalonians and UB graduates who state the pizza taste as great and exactly like it did in the 60's, 70's, and 80's.

I asked besides pizza what are some of the more popular items.  Their BBQ Pit wings won best BBQ Wing at Wing Fest.  Their gluten free pizza is super popular (one of these days I have to research what is gluten) as well as their Chicken Finger Pizza.  I told Mark I will be ordering one of those pies this week!  People also loved the subs and the fish fry is not just a lent special.  No wonder that with great consistent food, remodeling and modernizing their location, keeping up with the times, and having a great GM like Mark that Bocce Club is UB Bull Run's MunchMadness King.

Thank you to all who voted and to the restaurants who truly embraced this fun competition.  Buffalo truly does have the best food!  About UB Bull Run.  The website was created for New York (Buffalo - UB) Bulls fans to get updates, news, articles, live scoring, and come together as a community.  The Bulls are moving in a great direction and their is always room for more fans on the site. 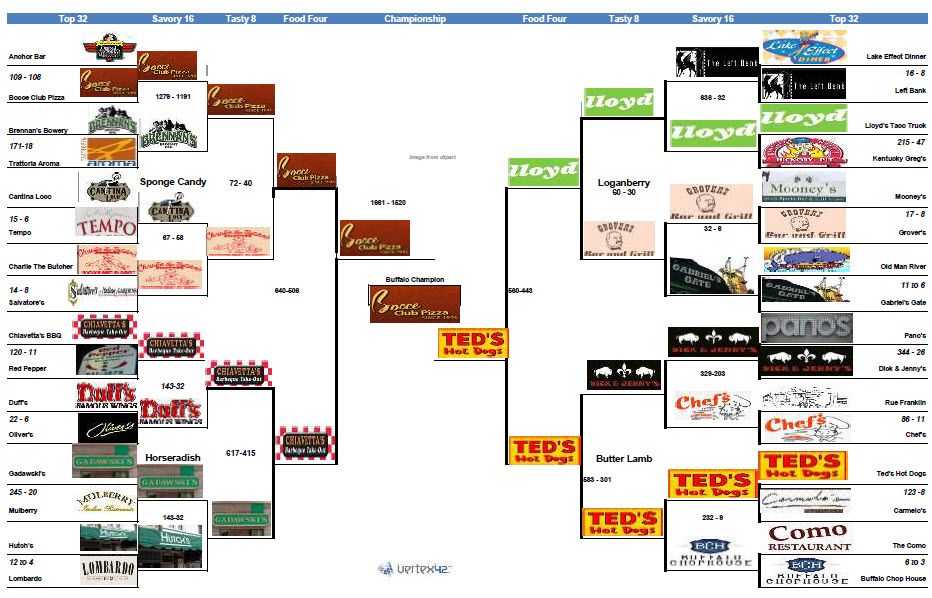