Munch Madness started exactly two months ago with the sole purpose to crown the best eatery in Western New York.  It was also created to help fill the slow time with UB Athletics.  Thirty two entered and now down to the final two.  I want to specifically thank Dick & Jenny's, Chiavetta's, Brennan's Bowery Bar, and Gadawski's who embraced this competition and engaged their fans.  It was never my intent with MunchMadness to drive business to the great restaurants but I am glad that occurred. Received great messages from WNYers who tried out the restaurants  in this contest and loved them (still does not offset the amount of head scratching why no Mighty Taco).  Thank you to all that voted and participated.

One last time.  Buffalo and WNY have some amazing places to eat.  At Bull Run you will decide the best place! Thirty two teams entered and now only two remain.  In the Eat More Final Four Bocce Club Pizza and Ted's Hot Dogs punched their ticket to the finals.  This voting has typically been two days.  For the final the voting will end on Sunday June 1 at midnight. 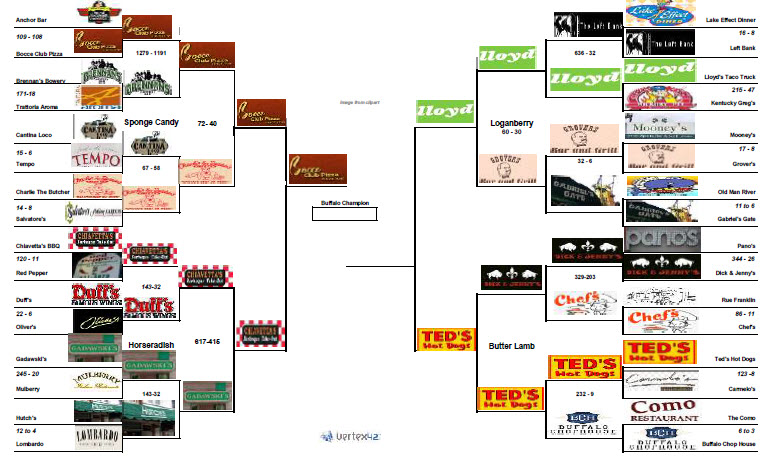 Upon returning from WWII my Dad, Dino Pacciotti, started working at the Bocce Club on Hickory St in Buffalo. The club had bocce ball courts in the yard and served drinks & sandwiches inside. In 1946, Mr. Pacciotti seized the opportunity to purchase the club. He soon found an old pizza oven in the basement and started experimenting. He formulated his own unique pizza recipe and Bocce Club Pizza was born. In 1959, Dino moved into the Bailey Ave location in Amherst, seeing the proximity to UB South campus as a big positive. In 1988, our Hopkins Rd location in Williamsville opened, not far from UB North campus. (read more on website)

When Greek immigrant Theodore Spiro Liaros came to America in 1913, his pockets were empty and he didn’t know a word of English. Though he had energy and optimism to spare, there was little reason to suspect that he would one day establish one of Western New York’s most beloved traditions. Ted, as he came to be known, invested years of hard work in a variety of business ventures, including a horse drawn hot dog cart that he operated in a park on Buffalo’s West Side, in close proximity to the construction site of the new Peace Bridge. The sister of the construction site’s foreman was using a tiny nearby tool shed to sell sandwiches to the workers and passersby. When the bridge was finished in 1927, she offered to sell the shack to Ted.  (read rest of story on website) 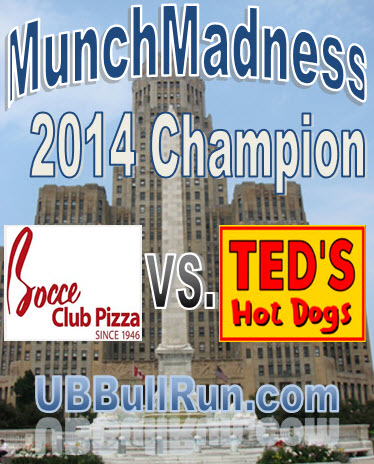