You have trimmed the field from 32 to 16. Starts back in the Sponge Candy bracket.

Share All sharing options for: MunchMadness - Second Round - Bocce Club vs Brennan's

Buffalo and WNY has some amazing places to eat.  At Bull Run you will decide the best place!  32 eateries entered and 16 are ready for the second round.  Voting really grew as the first round pressed on.  Yes social media plays a large factor for restraunts and in 2014 who does not grow their brand using ZMOT advertising?  Participants in the second round included Bocce Club Pizza,  Brennan's, Cantina Loco, Charlie the Butcher, Chiavetta's, Duff's, Gadawski's, Hutch's, the Left Bank, Lloyd's, Grover's, Gabriel's Gate, Dick & Jenny's, Chef's, Ted's, and Buffalo Chop House. 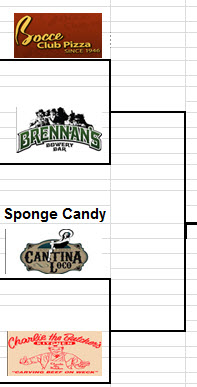 How did they get here?

Bocce Club pizza kicked off Munch Madness against Buffalo's most famous restaurant, Anchor Bar. Bocce vs. Anchor This match was classic and came down to one vote. Seconds before the voting closed, one last vote swung the victory for Bocce Club.  No other matches were so close.  I did not see this victory.   Brennan's Bowery Bar won in a landslide taking 91% of the votes over Trattoria Aroma!  This victory was easier to predict. Brennan's vs. Trattoria Aroma

I spent the Easter break halfway between Greensboro and Raleigh.  My brother-in-law Mitch from Kenmore and his wife from Niagara on the Lake moved down 14 years ago for her to take a teaching position like many did back in the day.  Of course it was going to be temporary and they still would love to come back to Buffalo.    While working recently a co-worker told Mitch about this place in Greensboro owned by someone from Buffalo that served beef and weck and has he ever heard of that?  Also he stated they ordered the pizza and was too doughy for their liking.  Mitch and I drove 35 minutes each way to get this pizza.  The wings were solid but the pizza did deliver on the Buffalo standards!  Lucky to have such great pizza in WNY and does not taste like cardboard with tomato sauce.

When I worked close to Main and Transit, Brennan's by far was my favorite lunch place. Brennan's is the type of place that you always say I am going to  try something different but end up ordering the same item every time because they are so good.  Great wings, great sandwiches, specials, and much more.