Welcome Gadawski's and Chiavetta's to the Tasty Eight. 32 have entered and 7 still stand. We are heading towards a champion!

Buffalo and WNY has some amazing places to eat.  At Bull Run you will decide the best place!  Thirty two teams entered and we are down to the Tasty Eight.  Bocce has punched their ticket to the Eat More Four.  The remaining six and this weeks match-up is Chiavetta's vs. Gadawski's, and upcoming Lloyd vs. Grover's, and Dick & Jenny's vs. Ted's. 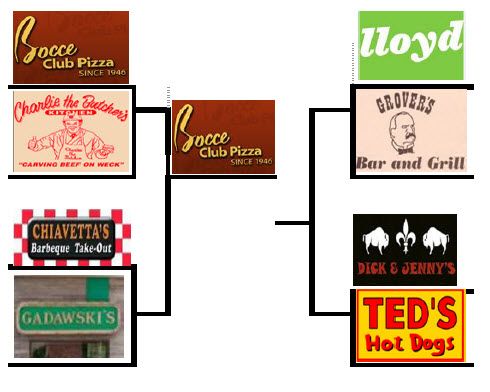 Chiavetta's vs Gadawski's - How did these fine to establishments make it the the third round.

This is going to be a very tough match-up as both restaurants have great fans who turned out for the first two rounds.  It is a shame that only one can move on.  Good luck.

I recently stopped by a fund raiser to pick up dinner for the family that was promoted as a Chicken BBQ.  I naturally assumed Chiavetta's.  To my dismay it was not Chiavetta's.  The BBQ was alright, but it was less than the standard Chiavetta's has set all these years.  I love the way Chiavetta's has perfected the art of cooking chicken (for us griller's we know chicken breast maybe the hardest to grill to perfection)  I like the charcoal boxes and the gates used to flip the chicken over.  Next time you are at a fundraiser walk on over and watch the process.

As you can imagine a restaurant like this is not on the leading edge of social media.  I have found three video's for Gadawski's.  The video below is from Mr. Gadawski's birthday party in 2012.  I am not going to guess his age but I am going to assume he is a member of AARP.  Watching this video you can see why this restaurant has lasted so long.  The sense of humor, energy, and passion.  If Gadawski's beats Chiavetta's I will go to dinner and take a video for the next round.  You put your sweet tushie that I will be ordering pierogies.