Two Buffalo heavyweights lock horns (or chicken bones) in the second round of the Horseradish Bracket.

Buffalo and WNY has some amazing places to eat.  At Bull Run you will decide the best place!  We are getting deep in the second round. Participants in the second round included this match-up of Chiavetta's vs. Duff's and upcoming Gadawski's vs. Hutch's, the Left Bank vs. Lloyd's, Grover's vs. Gabriel's Gate, Dick & Jenny's vs. Chef's, and Ted's vs. Buffalo Chop House.   Second round victors are Bocce Club and Charlie the Butcher. 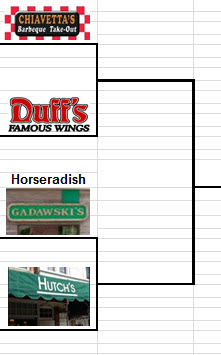 How did Chiavetta's and Duff's make it into the second round.

Chiavetta's took down my favorite Chinese-Vietnamese restaurant in Amherst, Red Pepper.  The Chiavetta's brand was too strong as they captured close to 92% of the votes.    Chiavetta's vs. Red Pepper

Duff's took on Oliver's and the turn out was less than expected but Duff's still captured 78% of all the votes.  Duff's vs. Oliver's

Hopefully as the winter is almost over (at least we hope) you should be seeing in the local papers, church bulletins, school fliers, and etc. that a Chiavetta's BBQ is planed to raise money for a cause.  You do not have to hire Chiavetta's just for fundraiser but I can only imagine how much money the BBQ's have raised in WNY.   I can already smell the chicken cooking and the first bite perfectly cooked with that vinegar zing.  Oh it's the best chicken.

You have to love the energy of this young man!

I saw an interesting blurb on Duff's:  Anchor Bar invented the wings and Duff's perfected them.  Interesting to see Duff's is starting to either franchise the restaurant or just expand (take over the world!)  A long time ago in galaxy far, far away on a work trip we had a late night in the conference room.  We all wanted to have a beer and some dinner. One person wanted to get wings at BW3's.  Many of you know where this is going.  Thinking this is a local place that does good wing's, we make our way.  Well, BW3's is Buffalo Wild Wings.  I ordered a cheeseburger!

The Commander-in-Chief stops at Duff's for wings!