Buffalo's big win over Ohio put's UB into solid quarterfinal bye position. Had Ball State hung on against WMU the Bulls might even be looking at a bye into the Semi's. Not that the a bye into the Quarters for a team who is breaking in a new coach is anything to sneeze at mind you.

WMU is now all alone in first and needs to be because if Toledo splits with them when the season is over it's looking like the Rockets win over Buffalo could tip the tie breakers in their favor. That win is also what puts Toledo in at the #2 seed ahead of Buffalo.

If Buffalo win's out then the Bulls want Western Michigan to lose to Toledo. In a heads up duel for the number two spot Buffalo wins against Western Michigan. The low bar for Buffalo is hopefully winning their final two home games against Miami and Bowling Green. If the Bulls manage that then they secure the #3 seed in the conference. 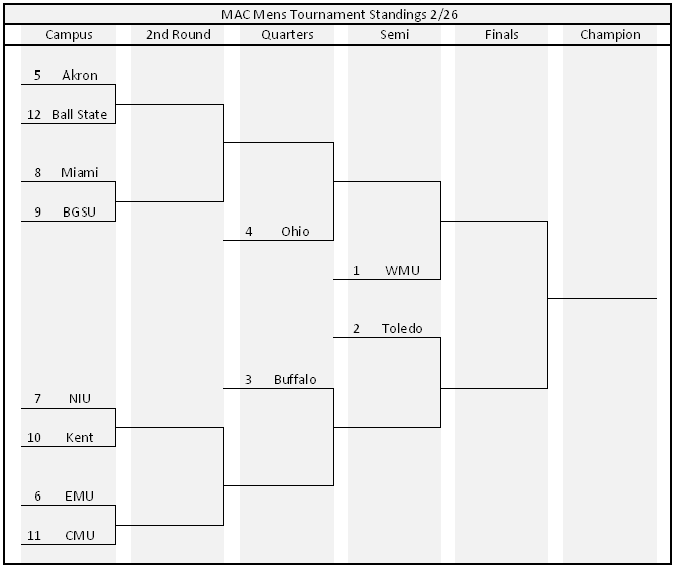 Akron missed a golden chance to pass Ohio for the final bye seed. Miami was too much at home for the Zips tonight. Meanwhile EMU beat up on the Chips keeping them at the #6 seed while NIU's upset of Toledo puts the Huskies at a respectable seven seed. NIU's win over Miami earlier this season moves them ahead of the Redhawks.

Bowling Green, and Kent are tied but the tie breakers seem to be falling with the falcons.

Finally there is CMU and Ball State rounding out the bottom of the conference. BSU was oh so close to their second win tonight. Their only other win was.... Aww Hamburgers... Over Buffalo..