How to Criticize UB Athletics in 2014

A lot of criticism was lobbed at UB Athletics in 2013 as many changes were made, yet two talented teams failed to win MAC Championships. Now that we look forward to 2014, use this cheat sheet to guide your future criticism and avoid outdated STRONG TAKES.

Share All sharing options for: How to Criticize UB Athletics in 2014

1) Do question recruiting: UB had a lot of talent on the team that was recruited by Turner Gill, so there is room to criticize the impact of Quinn recruits minus Joe Licata who is seen as someone who was signed and sealed to UB. In the first year completely post Gill, Quinn will have a chance to prove he selected good players. But until he proves it, I think it is okay to say Quinn's recruits have something to prove.

Don't cite Rivals: "Quinn's 2011 class was ranked 143rd on Rivals" is the quickest way to show you know nothing about mid-major football. Khalil Mack was an unknown in high school, now he's a top 10 draft prospect. We won't get the 5-stars, so the best thing we can do is get hard working kids who come in and buy into Quinn's system. Rivals has no methodology to capture that. UB faner 121 Merrimac came up with a way to evaluate mid-majors based on other offers the recruit received...still imperfect, as Khalil Mack only received an offer from Liberty, yet it at least takes a more realistic approach to mid-major recruiting than Rivals or similar recruiting services.

2) Do question personnel choices: It started with Oliver over Nduka and Gill, which worked out in the long run, but continued with Zordich over Licata, dropping Means and Mack into zone coverage on passing downs. You can even question the hiring of Lou Tepper, who despite the experienced defense and the more effective offense and special teams, only improved UB's points allowed per game by 3 points, from 29/game in 2010-11 to 26/game in 2012-13.

3) Do question level of competition: We beat cupcakes, exclusively.

Don't suggest UB should be playing top teams: There have been 3 types of UB teams, 1) the team that can't beat anybody. 2) The team that beats cupcakes, 3) The team that beats cupcakes and beat Ball State that one time. We haven't seen a dominating UB team, and we're not ready to take on the best. We are where we need to be, consistently beating cupcakes until we get to the point when we aren't nervous about that Stony Brook game...then we can move forward...one step at a time Bulls fans.

4) Do wonder if Reggie could have done better: To quote the old lotto slogan, "Hey, you never know" Reggie had that ability to make us feel like our team was a team of destiny. I felt it during the Battle years, during the Pierce years and with Watt and McCrea. We never won and some feel Reggie never would have won. It's a great debate because there is no true answer.

Don't question the motive of the firing: But don't question the motive for the firing. Obviously I think even the Reggie haters would have preferred to see football make a change than basketball. But Danny White knows basketball. As the "best rapper alive" Jay-Z once said: "there's much bigger issues in the world, I know. But I first had to take care of the world I know. Danny White knows basketball, and given two almost identical situations in football and basketball, it makes sense to defer on football while taking action on basketball.

5) Do criticize the inconsistency of the 13-14 team: They were the best of teams they were the worst of teams. When Evans was moving the ball and Freelove was scoring from beyond the arc and McCrea was going Kraken, UB looked like a sweet sixteen team. When no shots could be hit, turnovers were abundant and fouls of both the personal and technical kind accumulated, UB looked bad. This was accentuated by a season ending loss vs EMU. 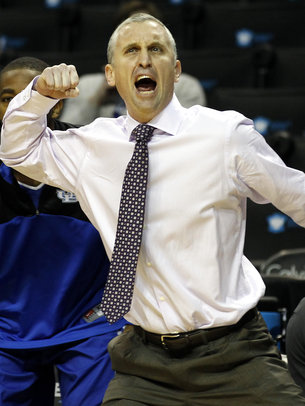 Taking the loss to EMU & spinning it into a catch all reason to attack everything.

There are 4 teams in the finals right now, Yale, Murray State, Siena and Fresno State. The CBI for some reason finishes with a best of 3 series. I live two hours from Fresno and had no idea they were playing.

Our program needs money or exposure, and the CBI/CIT costs money and gives little to no exposure back. Also the team was flawed with their inconsistency, so any talk about winning the CBI/CIT is greatly optimistic and naive.

6) Do question if Bobby Hurley will be able to win the MAC: With no head coaching experience to draw on his ability to build a program, it's fair to wonder if he'll have what it takes.

Don't question if he wants to be here: Mostly because it doesn't really matter. White brought in Hurley when no one thought about picking up Hurley, chances are he can get another buzzworthy coach to UB. In the meantime, the best way for Hurley to get out, if he wants out, is to win.

7) Do question the effectiveness of a statewide campaign: Will it work, who knows, probably not.

Don't call it a slap in the face/alienation of Buffalo: Buffalonians are loyal, passionate and prideful when it comes to their city, but UB is not Buffalo's college team. If Buffalo fully supported UB, the NYBI would be a bad idea. When a majority of students and alumni are not from Buffalo, but from NY State, it just makes sense to feature the state. Buffalo has a New York City complex, and that is what muddles the NY Bulls.  If New York City was called New Amsterdam but the state was still called New York, I think Buffalo would be proud to represent the State as the New York Bulls, and we would be free from confusion with the big city downstate. We need to focus on that pride, focus on the NYBI showing the importance of Buffalo in the state of New York. Also Syracuse at Buffalo for the NCAAs should have been a hostile environment, I get the feeling we welcomed Syracuse with open arms. That's a slap in the face to Buffalo.

8) Do question the timeline, or the choices made for UB's future: I'm not crazy about everything planned, and I hate UB stadium and think it needs to be demolished.

Don't criticize new ideas or ambition: That said I've been a UB fan for 11 years and seen small progress made on the brand, and on the facilities. I don't want to be here in 11 more years still complaining about not having a field house or being able to get a decent hot chocolate at football games.

I want my AD like I want my linebackers. Whether they do something right or something wrong, I want them to do it aggressively, I don't want to see a linebacker standing around, blow something up, hit something even if it's not the guy with the ball. Danny White has been nothing if not aggressive and that is refreshing.

9) Do talk about him leaving for a better job: He wants to be the next AD at Notre Dame or Duke, well good, we all have aspirations. To get there, he's going to have to prove himself here. Unlike Warde, who did a good job, but his victories were temporary, White seems to be focused on building something sustainable at UB.

Don't talk about the negatives of him leaving: One takeaway from my time at USC is that when you are at a major program, all the facilities are built and you just do maintenance. You can't go to Duke and propose to tear down Cameron Indoor Stadium, it's an establishment. For a young administrator, it's also very boring. White may want to move to the top level of athletics, but this may be his only chance to build something that was his. Don't underestimate the importance of that to an AD like Danny White.

10) Do criticize his selective twitter presence: Sometimes he's in our face with BIG NEWS that disappoints, other times he's quiet when things are bad. He risks desensitizing us with his enthusiasm and risks creating frenzies when his silence is left up to interpretation.

Don't criticize his enthusiasm: That said, in the age of twitter, it is important to sometimes take a breath and wait for official word. I think we have learned to take BIG NEWS with a grain of salt while appreciating the work he is putting in may be big to him, although not so big to us.

If UB is going to be a successful mid-major, we will have to get used to coaching rumors, look at Arkansas State Football has gone through. We should expect less loyalty, but demand more accountability, and in that vein, we are lucky to have an way to reach our AD and demand that.