Share All sharing options for: Talking Bull: UB to defend their Swimming Title 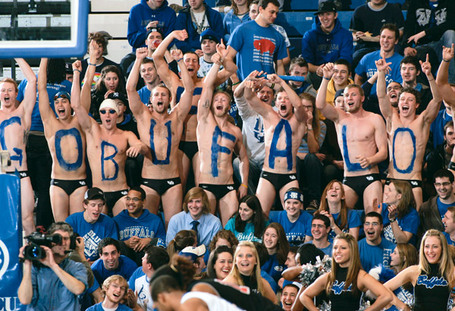 Are not just shirtless enthusiastic basketball fans. They are the defending MAC Champions in Men's swimming. They are sending nearly a half dozen guys to the Olympic trials and are set to defend their title.

UB men set to defend MAC swim title - University at Buffalo - The Buffalo News
Throw the word "Olympic" into anything and suddenly, heads turn. You might have missed that the University at Buffalo won the Mid-American Conference men's swimming championship last season. But have five swimmers qualify for the U.S. Olympic trials, to be held June 25-July 2 in Omaha, Neb., and people start to take notice.

Things at TCU not nearly as bad as expected:

TCU Drug Test Turned Up 5 Users, Not 82, According To Report - SBNation.com
Former TCU Horned Frogs safety Devin Johnson may have a future career in politics. After his alleged mid-drug deal estimation that 82 TCU players failed a drug test administered by Gary Patterson, the Star-Telegram reports he was off by just a tad. Five players failed the test, while 11 had trace elements of marijuana -- 86 players showed no signs of drugs whatsoever.

The estimate of 82 might have destroyed the season, if not the program.

The USPS owes a big thank you to Alabama who aparenty is sending huf s to select recruits.

Alabama Sends 105 Letters To Recruit In One Day - From Our Editors - SBNation.com
This is a paywall article, but you can get the general idea. Alabama didn't just send four-star tailback recruit Alvin Kamara a few letters expressing interest ... the Crimson Tide staff sent him 105. In one day. All delivered at the same time.

Boise may be on board Quickly, but might still just pass Pitt and Syracuse on their way out

Big East Expansion: Boise State Could Perhaps Be Convinced To Join Early - SBNation.com
The Boise St. Broncos are scheduled to join the Big East in 2013, but haven't ruled out joining in 2012. The Broncos have reportedly been in touch with the WAC about stowing their non-football sports there for 2012 if need be, and the conference reportedly has been pressuring BSU to join early to offset the loss of the West Virginia Mountaineers.

There are also murmurs that the ACC is "delaying their schedule"and that Pitt / Cuse are trying to swing a similar deal to West Virginia.

Manual takes over at UConn, a program plagues with every kind of hurt there is, and right off the bat good players are being shown the door.

Jerome Junior Kicked Off UConn Football Team - SBNation.com
University of Connecticut safety Jerome Junior (Baltimore, Md.) has been suspended from the team for a violation of team rules. He is no longer enrolled at the University and will not be for the fall 2012 semester as well. Junior was to be a redshirt senior this fall. He had 60 tackles in 2011, which was fourth on the team. The University will have no further comment on this matter.

Meanwhile in the SEC

Georgia Suspends Sanders Commings Two Games For Violence Arrest - SB Nation Atlanta
The Georgia Bulldogs will be without the services of senior cornerback Sanders Commings for the first two games of the 2012 football season, the school announced. Commings was arrested back on January 21st on charges of domestic violence and simple battery after allegedly striking his girlfriend in downtown Athens.

Imagine what a guy who gets 104 letters from Alabama can get away with!

BracketBusting in South Dakota - Sports - The Spectrum - University at Buffalo
The Jackrabbits come into the contest undefeated on their home floor this season (11-0), and are in the midst of their best season ever in the Division 1 ranks. Buffalo will likely experience a hostile environment in Frost Arena Saturday, as they are expecting a large crowd on hand for the school's first nationally televised contest.

Lambert fills in at UB - University at Buffalo - The Buffalo News
"Short term, we're going to continue to operate as Warde laid out the plan for athletics," Lambert said. "Long range, after we bring in a candidate, those first six months will be a time for reflection and a time to ask, 'what can we do better?'‚"

John Lambert Named Interim Athletic Director - Sports - The Spectrum - University at Buffalo
Lambert arrived in Buffalo in 1996, was an integral part of moving Buffalo to Division 1 athletics, and is currently in charge of development for the athletic department. Lambert has earned the credentials to hold the athletic director position, but has made it very clear he has no intentions of taking the position long-term.