MunchMadness - 3rd Round Lloyd vs. Grover's

Halfway through the Tasty Eight as Chiavetta's punches their ticket to the Eat More Four.

Share All sharing options for: MunchMadness - 3rd Round Lloyd vs. Grover's

Buffalo and WNY has some amazing places to eat.  At Bull Run you will decide the best place!  Thirty two teams entered and we are down to the Tasty Eight.  Bocce Club Pizza and Ciavetta's punched their ticket to the Eat More Four.  The remaining four are this weeks match-up of Lloyd vs. Grover's and upcoming Dick & Jenny's vs. Ted's. 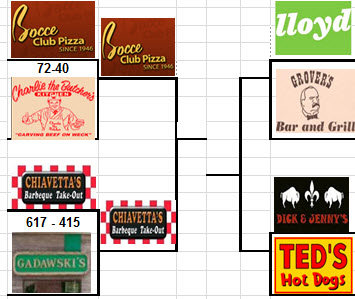 Lloyd vs. Grover's Bar and Grill - How did these fine eateries make it to the third round

In the second round Lloyd dismantled The Left Bank taking 95% of the votes.  Lloyd vs. the Left Bank

Grover's took on Mooney's in the first round and took 67% Grover's vs. Mooney's

As the rounds move on the match-ups are really heating up.  A great turn out for Chiavetta's vs Gadawski's. Congratulations to the fans of Gadawski's for rooting for an awesome restaurant.   This match up does not stack up very well for Grover's.  Grover's had two cupcakes and now against a favorite to be in the final.  Good luck Grover's, you are going to need it.

After a morning play time with my son at Rollie Pollies, we stopped at a large big box hardware retailer where Lloyd was park in conjunction with a contractor appreciation event.  I congratulated the truck on their success in MunchMadness.  I was quick to find out that one, I am a terrible typer and have botched their name numerous times.  My bad.  Secondly, it is just Lloyd.  That it's and that's all, the 's for decorations.  From now on I will make sure to get your name correct.  The lunch as always was great.

As I drove down Transit to head to Lloyd, I passed Grover's.  I have never noticed them before.  I pay attention when driving as well as I type.  What a great location and a beautiful building.  I will be stopping in for lunch to try them out really soon.  I wish Grover's good luck as the Lloyd machine is picking up steam.   Look forward to a great burger and starting with the cheeseburger soup.  Can I make it a trifecta and have some sort of cheeseburger dessert?   Cheeseburger New York Style Cheese Cake?