Brick and mortar vs. Wheels and engines. BBQ vs. Taco's. Traditional Media vs ZMOT media. Sit down vs Sit anywhere (Or don't sit at all!)

Buffalo and WNY has some amazing places to eat. At Bull Run you will decide the best place! So far we have big wins by Bocce Club Pizza (Anchor Bar), Brennan's (Trattoria Aroma), Cantina Loco (Tempo), Charlie the Butcher (Salvatore's), Chiavetta's (Red Pepper), Duff's (Oliver's), Gadawski's (Mulberry), Hutch's (Lombardo), and congratulations to the first winner to emerge from the Loganberry Bracket, The Left Bank (Lake Effect Diner). Up next is brick and mortar vs wheels and transmissions. 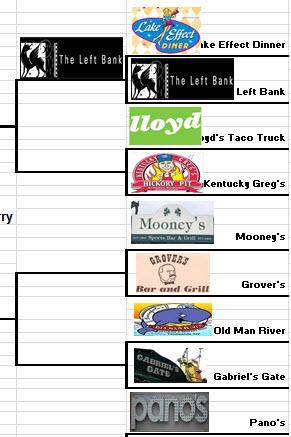 Kentucky Greg's Hickory Pit is the result of a life-long dream and passion of Greg Engelhardt. Greg began his career in the restaurant industry after receiving a Bachelors degree in business from the University of Kentucky in 1983. During the next ten years, Greg gained extensive experience in all aspects of the restaurant industry.

In 1994, Greg was anxious to start seeing his dream become a reality and having found his partner and wife, Pam, Greg engineered the start of the Hickory Pit by converting an old motor home into a barbeque stand selling his barbecued food in the back of a gas station parking lot in West Palm Beach Florida. Pam stood in the middle of the busiest intersection nearby to pass out menus to cars stopped at red lights. Within two years, Greg was serving over one hundred people a day with many repeat customers. His vision becoming reality, he was ready to open a restaurant.

With Pam's hometown being Alden NY, she knew that barbequed food was scarce in the Buffalo area at that time. Confident that the Southern foods and casual atmosphere would be readily accepted, Pam and Greg selected WNY as the home for their new restaurant.

I have to admit that I have never been to Kentucky Greg's but I will go to BBQ places when I travel down south. I pledge to gets my checks and fingers full of BBQ sauce in WNY real soon.

Buffalo may have been late to the food truck craze but is more than making up for it now. The player in the food truck world is Lloyd's Taco Trucks. Lloyd's single handily removed Mighty Taco from the top 32 (and for good reason!) My first Lloyd Taco I thought it was OK. Then my wife brought home a second one and it has been a craving every second since then. We try to have Lloyd's every Friday for lunch. How do we know where the truck's are going to be Twitter or Facebook! Amazing what social media has done for food trucks as to location or any restaurant to tweet out specials for the night to drive traffic.