We are halfway through the first round of Munch Madness. We start up the Loganberry bracket. Up first from the bracket is The Left Bank vs. Lake Effect Diner.

Buffalo and WNY has some amazing places to eat. At Bull Run you will decide the best place! So far we have big wins by Bocce Club Pizza (Anchor Bar), Brennan's (Trattoria Aroma), Cantina Loco (Tempo), Charlie the Butcher (Salvatore's), Chiavetta's (Red Pepper), Duff's (Oliver's), Gadawski's (Mulberry), and last round winner Hutch's with the slowest and lowest vote over Lombardo. 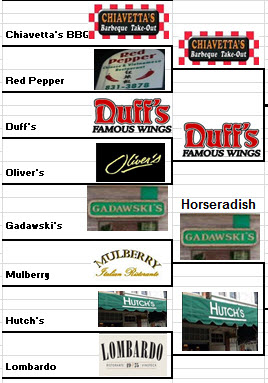 So we are exactly have way through the first round of Munch Madness. We start the Loganberry bracket and the first two restaurants are The Left Bank vs. Lake Effect Dinner. So far any show that appeared on Diners, Drive-Ins, and Dives failed to move forward. Does the Triple D curse doom Lake Effect?

First up is The Left Bank Web Site Menu

The Left Bank is many peoples go to restaurant in WNY. Let Bank was my go to for my wife's birthday this year and she loved it. If you want to eat at Left Bank please make a reservation . Trip Advisor is my go to website when I travel and looking for a solid restaurant. Trip Advisor has Left Bank ranked the second best restaurant in Buffalo NY out of 897 (Is there really 897 restaurants in the Buffalo area? Also in the top three with Urban Spoon and Yelp!Now I can see why many were angry with our pick of 32) From Trip Advisor....

Tucked into the cobbled back streets of Buffalo's West Side, Left Bank offers some of the finest cuisine, French and other wise, you can experience. It also boasts an imaginative wine list. Make reservations early...or be disappointed....as locals as well as visitors quickly discover this gem.

Left Bank fills up fast and can be hard to get a table before a concert, Sabres game, or any event happening in Buffalo.

Next up is Lake Effect Diner. Web Site Menu

From the web site

Lake Effect Diner is one of the last few dining car-style diners left in America. Lovingly restored by the Curtin family, this diner hearkens a better time. With old-fashioned milkshakes and a hearty menu of home favorites, Lake Effect has become a popular destination for locals and travelers. The Curtin family's decision to switch to a menu with a focus on meats, fruits and vegetables from Western New York's farms landed it a starring role on Food Network's "Diners, Drive-Ins and Dives" featuring Guy Fieri.

The Curtin family also owns and operates the Steer, Dug's Dive, and Woody's.