Another totally different match up in MunchMadness. 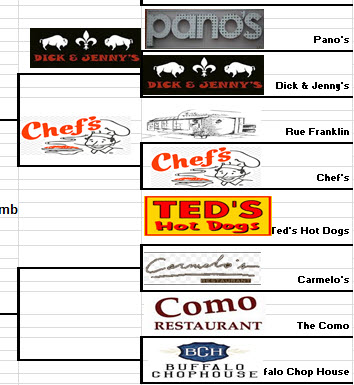 My favorite hotdog in the world.  I have been to the original Nathan's and Portillo's in Chicago and none of these can hold a candle to Ted's.  Can I cook a Shalen's cook great on the Webber in the backyard.  Yes.  But it is not as good ever from Ted's.

When Greek immigrant Theodore Spiro Liaros came to America in 1913, his pockets were empty and he didn’t know a word of English. Though he had energy and optimism to spare, there was little reason to suspect that he would one day establish one of Western New York’s most beloved traditions. Ted, as he came to be known, invested years of hard work in a variety of business ventures, including a horse drawn hot dog cart that he operated in a park on Buffalo’s West Side, in close proximity to the construction site of the new Peace Bridge. The sister of the construction site’s foreman was using a tiny nearby tool shed to sell sandwiches to the workers and passersby. When the bridge was finished in 1927, she offered to sell the shack to Ted.

Yes I know that this is for Ted's in Arizonia but you have to see this hot mess:

This is by far my wife's favorites restaurant in Western New York!  Food is always great and the service is always on point.  This is an upscale restaurant but does not ever feel pretentious.    A restaurant with the farm to table montra sourcing from local farmers.  If you have never been to Carmelo's, take the trip to Lewiston.

A neighborhood restaurant at its core, Carmelo's has many regular guests and openly accommodates visitors to the area with welcome arms. Carmelo's hosts 16 tables and seats 8 at the bar, the perfect size for exceptional service and fresh, quality food. The staff is an essential part of Carmelo's success. The front of the house team works hard to anticipate and exceed our guests' expectations, while the kitchen staff diligently executes our ever changing seasonal menu. Dining at Carmelo's is an adventure and a way to enjoy the taste sensations of this season, while looking forward to the next.