Share All sharing options for: MunchMadness - Rue Franklin vs. Chef's 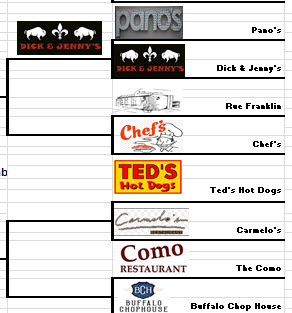 Rue Franklin is Buffalo's true upscale french cuisine restaurant. My wife and I had an amazing meal. We did not sit on the patio but next time for sure. Yelp! review:

I love going to The Rue. This is what fine dining should be. I've always gone with the Prix Fixe option for $35.00 you get a starter, main course and a dessert. I highly recommend the Ile Flottante for dessert (make sure you tell your server you want this as they often sell out of them and you should order it at the beginning of your meal)

For many years, anniversaries, holidays and special occassions have been celebrated at this intimate, welcoming restaurant. The creative menu has a definite French accent, complemented by a well thought out wine list. Service is gracious and unpretentious, consistent with the understated decor. 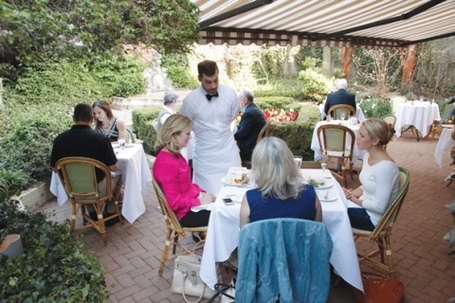 Chef's Restaurant Website Menu
What can you say other than the best Spaghetti Parm anywhere. There maybe other items on the menu but this is all that I have ever ordered. It is a perfect meal. My best memory of Chef's was sitting on Rick Martin's lap as a very young boy. The bread is amazing and always remember little touches like bazooka gum given with the check for the kids.
From the website:

Chef’s opened at its current site on the corner of Seneca and Chicago Streets back in 1923. This was Lou Billittier’s childhood neighborhood. In 1941 Lou was hired to wash dishes by then owners Gino Silverstrini and Lee Federconi. Lou worked his way up to busboy, then waiter, eventually earning the title of restaurant manager.

By 1950, Lou was half-owner of Chef’s, and in 1954 he became sole owner, with financial assistance from his dad, Anthony Billittier. In the early days Chef’s had a limited menu of Spaghetti, Ravioli, Chicken and Veal Cacciatora. Lou has since expanded his menu to feature items ranging from Chef’s famous Spaghetti Parmesan to lighter items such as Pasta Broccoli.