Where does Mack go? The Bruwpeg Mack Draft game! Need your pick! Prizes!

The past week has been fun for Bulls fans with all the attention Mack and UB receiving. Expect the love fest to continue well past the draft. Reply to this article on where Mack lands.

Share All sharing options for: Where does Mack go? The Bruwpeg Mack Draft game! Need your pick!  Prizes!

Kudos to Khalil Mack for the attention he currently is receiving.  Here are some twitter links on Mr. Mack.  I have whipped up a Bruwpeg for the Mack draft.   Here is what  you need to reply to this article

2.  How does the commish announce UB?

3.  Tiebreaker #1.  How long is the cheesy dap hug from the Commish with Mack?

ADDED CAVEAT:  Extras credit can and maybe will be added if you correctly guess round and team any other UB athlete is drafted!

Winner will receive a $25 gift certificate to Mitchell's Tavern. Mitchells Tavern Website Go see a game worn UB gear on the walls of Mitchell's! Draft starts Thursday May 8 for ESPN and NFL to milk even more time.  You are on the clock. (PS I would not wait until Friday to get pick in!)

In case you did not know, Khalil is Arabic which means friend.  Be a friend to UB and use your signing bonus to build a field house.   If Cleveland was smart, do not waste a first run pick on Carlos Hyde but draft Mack and pick up Bo in the third round.

Am I the only one who finds the hugging to be over the top cheesy and lame? Commish taking some shine away from the draftees! 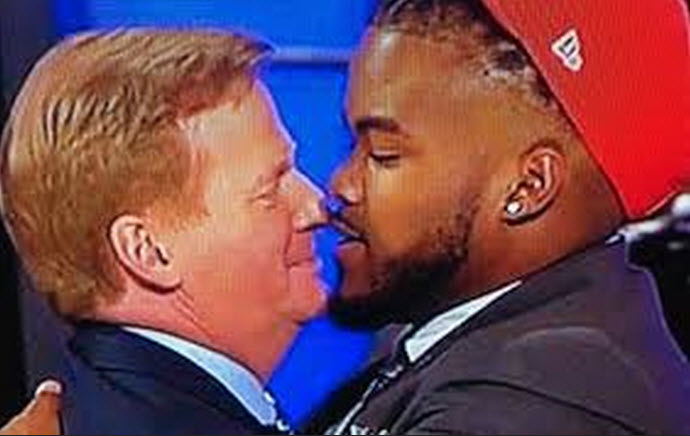 Update from Pro Day of Buffalo LB Khalil Mack: One longtime NFL scout just said he clocked Mack in the 40 at 4.45...

Khalil Mack looks back at his humble beginnings, before he was a potential No. 1 overall pick. http://t.co/auW0p4CTIw

Who's Pro Day was that, Khalil Mack? Or Herschel Walker?