Nature or Nuture? Chicken or Egg? Coaching or Execution?

The debate rages on: are we losing due to poor execution or is it the result of poor decisions by a coach in over his head? I decided to break down the UConn tape, to try to prove once and for all which was more responsible for our failure. After 1 Quarter, the passing game is down due to lack of execution, the scheme is good. The overall game strategy is about a push. The run defense is strong. The running game and the pass defense was bad and I think coaching is holding us back.

Although Buffalo led 7-3 after one quarter, I feel our coaches were to blame for the slow start to the game we needed to be up 14-3 after that onside kick.

The plan: Quinn saw something that led him to believe he could exploit the middle of the field, often using Neutz as a decoy to create favorable WR on LB match ups.

Why it failed: Execution. This one falls on Zordich, the OLine, and the loss of BO and Lee.

However, the 3rd error shows it is more than just Zordich, Its a full failure in execution by the entire offense. 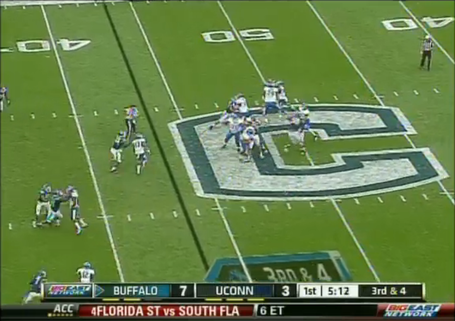 Zordich overthrows Hughes, who is bumped by the LB but the pass was uncatchable.

1st error: Hughes Route: Notice the matchup Hughes vs LB in space, very favorable on 3rd and 4. The black line shows the line of scrimmage, Hughes is 1 yard past that, by running the route at the line of scrimmage instead of at the first down marker, even if this ball is caught, it will not be a first down. Maybe if Lee was running this route, it would have been at a proper depth.

2nd error: Next, you assume Zordich should lead Hughes, if he hits Hughes in stride, there is no way the LB can catch him. It is a good point. However if you look back at the pocket you see UConn's DT ready to plant Zordich into that big C. You might ask: "if they brought more men then we could block why wasn't Hughes more open?"

3rd error: Because they rushed 4 and we kept 6 in to block. UConn ran a simple stunt, our line did not pick it up, Murie the RB was in to help with blocking but he failed to recognize the stunt and help out his line. The Branden Oliver injury hurts the passing game here, you assume the three season veteran might have recognized the pressure and given Z more time to make a better read and throw.

4th error: Zordich, not making the pass catchable. If Zordich gets the pass closer, he probably gets a pass interference call. It seems many Zordich throws are no where near any receiver, this was one of them, and that is not acceptable at the FBS level.

The Running Game:
The plan: Get Murie and Campbell the ball often continue to establish the run without BO.
Why it failed: Coaching, too predictable, we didn't run right.
UConn clogged the middle and there was nothing there. Still, we ran up the gut 5 times only gaining 2.6 yards per carry. We ran right once, with the #4 running back on roster and got 5 yards of push from the OL. We found a weakness and promptly never tried it again in the quarter.
Running game details:
Overall Offensive Strategy: Good coaching and Bad Coaching
Good:
On our second drive, we got aggressive with back to back deep passes. We went for it on fourth-down and used the screen pass perfectly to take advantage of UConn's aggression. We ran at the goal-line. Took advantage of UConn tendencies on film with an onside kick.
Bad:

On our first drive we ran on 3rd and 9, showing a lack of urgency.

On the final drive of the quarter we failed to do anything to jump on UConn, a 14-3 lead might have really taken UConn out of their game. Why go onside kick, just to run two read options into the heart of the defense?

Overall Offensive details:
Defense
Pass Defense:
The plan: Rush 4, protect against the PA pass. Pull Mack down as a DE on 3rd down, have him attack with aggresive 4 man pass rush. Drop 7 into zone, force QB to make the perfect pass.
Why it failed: Coaching: It was a bad idea from the start. UConn was vulnerable to the blitz, so why did we decide to never send pressure, sometimes we only rushed 2 or 3. Buffalo's zone was picked apart against KSU why did think the same game plan would work better on the road against a Big East team?

Pass #1: 2nd and 8, play action pass for 9 yards and a first down. Three defenders are seen covering nothing, in front of a wide open receiver. 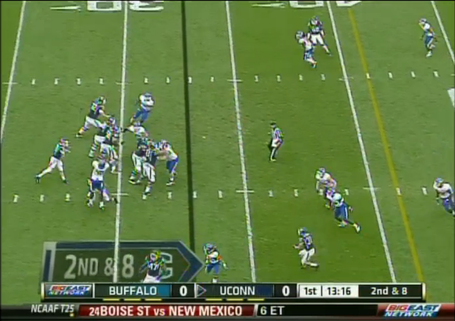 Our 3 defenders are in no position to stop the 4 yard catch or the 5 yard run after the catch. You can blame execution, bad zone drops etc, but if we cannot execute the zone, we should not run the zone. Part of coaching is knowing your teams limitations and putting the players in situations that mask their limitations and enhance their strengths. Throughout this 1st quarter, we did the opposite, we put our aggressive sack seeking defense into prevent mode, in the first quarter! This comes ten days after Dri Archer found nothing but room in the secondary, we continued to ignore the problem and play a zone based defense with more holes than swiss cheese.

Watching live Lester looks bad, another case of the weak UB secondary. Re-watching however, it was actually Delonte Wallace that made the costly error. We played cover 4 zone, Wallace covering underneath, Lester over top. There are only 4 receivers on the play so ideally every receiver should be double covered underneath and overtop. However Wallace makes a mistake and inexplicably sprints towards the center of the field abandoning his zone underneath the outside receiver giving UConn a huge window to make the throw.

Despite Wallace's lack of execution, I blame the coaches for this conversion. UConn kept 7 men in to block, that's how worried they were about our pass rush. Did we send 6 and see if Mack, Means and Way could make a play? No, we rushed 3 guys. No amount of double coverage can make up for having to cover wide receivers for 5+ seconds. Rushing 3 on 7 meant we would have never put any pressure on the QB and eventually someone would have found open space in the zone. 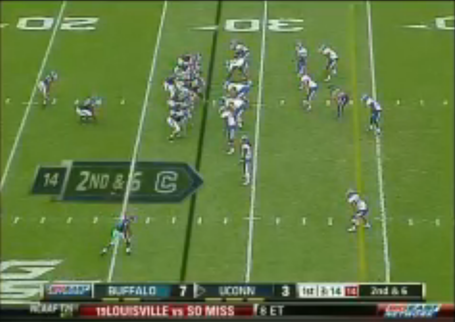 This is the case of bad scheme. Johnson lined up 7 yards off the line at the bottom of your screen. 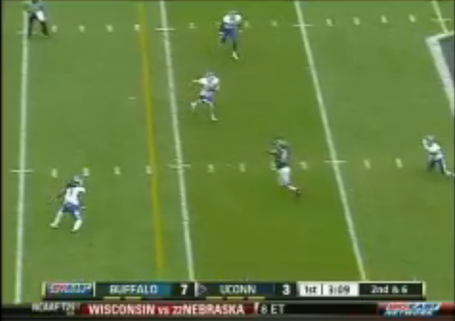 Johnson instantly drops back 9 yards in man-to-man coverage. This means he gave the receiver 16 yards of space on 2nd and 6. UConn is not a deep threat team. The scene above shows Johnson at the right five yard behind the receiver as he makes the catch. This is the answer to the "why does every Receiver seem wide open" question. Playing defense with so much cushion allows the offense to play catch, its way too easy.

Pass 7: 3rd and 8, 18 yard check down dump.
We rush 4, but only send 2. Colby Way and Steven Means rush then peel back in a disguised QB spy, two of our best pass rushers are not rushing the QB. As a result you get this: 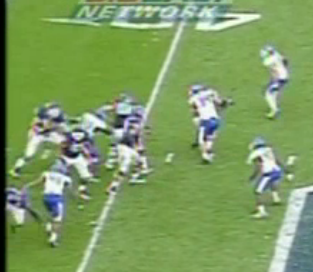 It's blurry but from left to right you see 2 Bulls, looks to be Willie Moseley and Khalil Mack completely enveloped by UConn's OL. Then there is Colby Way spying the QB a the 42, Means is the Bull at the 44 at the bottom right of the screen also spying the QB. For good measure there is a 3rd Bull in the area. Not pictured: ANY UCONN Receivers.

Due to our play call, Chandler Whitmer had 4.1 seconds in the pocket. He pumped twice, went through his progression then dumped it off. After poor tackling by the secondary, who were understandably tired from 5 seconds of good coverage, Means chased the receiver down and saved a touchdown but not before an 18-yard gain.

Passing defense details:
Run Defense:
The plan: Stuff the run, force 3rd and long.
Why it failed: It didn't (in the first), our efforts against the run were made moot by our awful pass defense.
Running defense details:
Overall Defensive Strategy:
Problems against the pass are systematic, not just a case of a bad secondary. A great pass rush makes a bad secondary look good. We chose not to rush the passer, making our bad secondary look awful. An unforgivable coaching decision.

Overall, while our execution is poor, our coaching fails to take advantage of our players strengths and continues to leave our weaker players on an island. The numbers are misleading. We are 120th in passing completion percentage. Which is ok because we are 34th in running. We only need to pass to keep other teams honest, so we can continue to batter them with the run.

We seem to be respectable at 59th nationally allowing 58% of passes to be competed. However, this is misleading: we've only allowed 56 pass completions (7th lowest in the nation) however, 37 of those completions were for first downs. 66% of the passes we allow go for first downs! We can't win that way. Based on the first quarter, we won't go anywhere until we fix our defensive passing scheme.