How To Lose a Lead in Five Minutes: UConn 2nd Quarter

At one point in the First Quarter, UB ran twice as many plays as UConn, 16 to 8. UB converted that advantage into a 7-3 lead. In the Second Quarter, UConn returned the favor, running 8 plays to Buffalo's 4. UConn took full advantage, converting the play advantage into two touchdowns and a 17-3 game lead.

Share All sharing options for: How To Lose a Lead in Five Minutes: UConn 2nd Quarter

Up 7-3, I blamed Coaching for our poor run game, offensive strategy, pass defense and defensive strategy. I felt Zordich was to blame for our lack of passing game with some blame going to the offensive line and the receivers. The run defense played well.

One play into the second period, UConn would go up for good, and basically put the game away minutes later with a long run, (so much for great run defense). Zordich would make an all-time bad play, but this time I put the blame on Quinn!

The plan: We tried to take advantage of strong running in the 1st half by throwing play-action passes.

Why it failed: Coaching. The run game was not established, UConn pinned it's ears back, blitzed, double covered Neutz and dared someone else to beat them. No one else did. Instead of continuing the screens and dump off, (which UConn showed no interest in stopping) to up Zordich's confidence and making UConn pay for aggression, we went long like a 12-year old playing Madden. Neutz was only targeted once in the quarter. 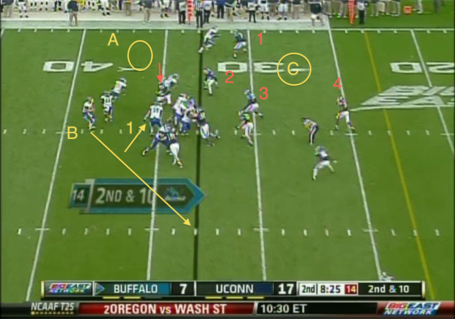 1) Yellow #1: UB ran a fake Jet Sweep, with a pulling guard. Smart Football tells us why this play drives defenses crazy, and shows some examples of RG3 running it successfully. We ran it poorly, the Right Guard Graham Whinery cannot get over to stop the charging defender who hits Zordich and causes the interception.

2) Ok it was a tough assignment for Whinery, so Zordich has 3 options once he knows a LB's helmet is headed for his chest.

2A) Toss to the back, wide open, probably a short gain, but an easy out.

2B) Take off to the right, there is NO one there, he might score.

2C) Toss it in a green area between 4 UConn defenders

Zordich went for 2C, and it is an awful unforgivable play. But I forgive Zordich, his mind made an OK decision, his arm just didn't have enough behind it. Personally, I only ask that my players make the right play mentally, what happens happens sometimes.

I blame Quinn and here's why: If Zordich takes the sack, it brings up 3rd and 17 from the 42. We all know Quinn will run the draw, and we'll be forced to punt from our own 40. Zordich knows this too, so he feels pressured NOT to take the sack to salvage points from this drive.

This is just me extrapolating, but I believe Quinn's Ultra-Conservative view of 3rd and long makes his players MORE likely to take risks on 2nd down, and it leads to plays like this.

The Running Game:
The plan: Run Campbell a series, then Murie a series, stay conservative.
Why it failed: Coaching, still too predictable, still didn't run right.
No adjustment made. We ran 9 times, 7 times right up the middle. If you remove Zordich's a 21 yard QB draw on 3rd and 7 our run numbers are:
8 for 24 yards, 3 yards/carry.
6 runs up the middle for 13 yards 2.1 yards/carry.
Running game details after two quarters:
In the 2nd Quarter
Overall Offensive Strategy: Bad Coaching
Good:
On our second drive, we ran the ball well, until an interception ended the drive.
Bad:

We seem to only be good on our second drive of each quarter. Passing game is broken, running game unimaginative. Passing deep on 3rd and 1 with 50 seconds to play was just a very bad call and possibly cost us point or at least a shot at a hail mary before the end of the half.

The plan: Rush 4, protect against the PA pass. Pull Mack down as a DE on 3rd down, have him attack with an aggressive 4 man pass rush. Drop 7 into zone, force QB to make the perfect pass. Only allowed 3 points, why change right?

Why it failed: Execution: While dropping everyone in zone and letting UConn pick us apart was a bad coaching scheme, it was in place to prevent the long pass. On the first play of the 2nd Quarter we gave up the long pass, and you can only blame the players for that.

Pass #1: 2nd and 7, play action pass for 45 yards and a Touchdown. The PA pass sucked all 3 of our Linebackers in, Both safties and Corner Najja Johnson jumped the run play. As a result, despite dropping 4 against only 3 UConn Fly routes, the outside WR and the Tight End were wide open. This forced the safety to choose who to guard, he choose the WR, the Tight End caught the pass and strolled into the end zone.

I would prefer the Safety I believer it was Lester, in this situation to take the Tight end, and force the QB to throw the more difficult sideline pass to the WR, but the Safety technicially did his job, staying with the widest and deepest man. The 2nd Safety (I believe Sherry) could have recovered and covered the Tight End, but he bit so hard on the run fake that he was no where near the play. You can only blame the players, for biting so hard, especially seeing as the run game was not hurting us badly.

Pass #2: 2nd and 8, PA pass for 14 yards and a first down.We rushed only 4 again, Whitmer had time to look to the third man in the progression. Sherry had great coverage but didn't make a play on the ball. He'll get there, he looks incredibly talented but extremely raw.

Pass #3: 2nd and 7, PA pass, hitch route for 6. As Nick Williams the WR motions to the right, the corner covering him backs 9 yards off the line of scrimmage, and proceeds to backpedal 6 more yards. Once again Williams just runs to the sticks, and turns around for an easy conversion. The only reason they did not get a first down is Williams had to dive down to catch an under-thrown ball.

Pass #4: 3rd and 4: 4 man rush gets there, Means forces Whitmer out of the pocket, Mack misses a sack, but the pursuit stops the QB after a 2-yard gain. 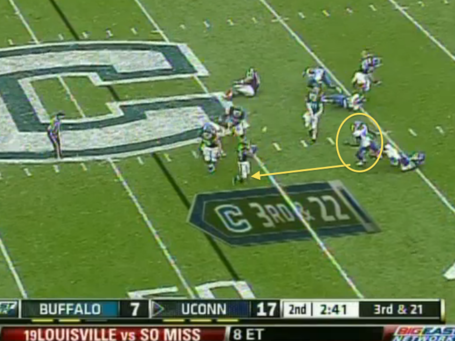 Mack is 5 yards behind the RB when he makes the catch, but shows amazing pursuit, and makes the tackle 15 yards past the line of scrimmage.

Passing defense details:
Run Defense:
The plan: Stuff the run, force 3rd and long.
Why it failed: Execution, our efforts against the run were still undermined by awful pass defense. And one bad decision gives UConn the big lead.
The run: 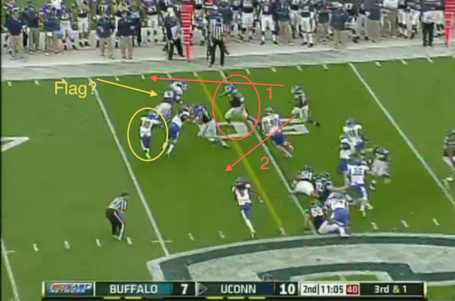 The play is simple we send Mack and Means into the A and B gaps, but UConn has the perfect play called, the near side pitch takes our two best defenders out of the play.

At the top you see a block in the back, that is what broke the play and it should have been flagged and brought back.

But it wasn't flagged so lets look at the immaturity of Witney Sherry. The back has 2 options, run outside or break it back inside. As a defender you always want them inside, the Calvary is coming on the inside. In the future, Sherry will run hard to the outside and force the runner into the hands of Wyatt Cahill and Issac Baugh. What did he do: 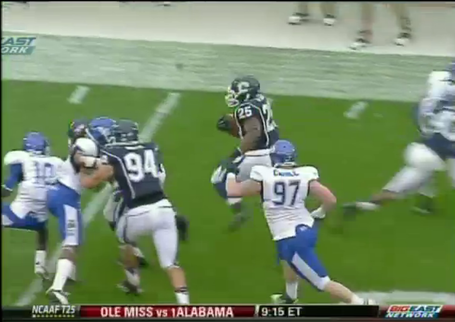 Sherry #10 to the left, slows down and engages the blocker, giving the running back the outside lane. It would be a good play if there was someone behind him to make the tackle, but when you play safety, there is never anyone behind you. 50 yards later, UConn is up 10, and with UB's offensive output, it felt like they were up 50. Sherry cannot make that mistake again.

Running defense details:
Overall Defensive Strategy:
Five Drives
In the second quarter, UB was outscored 14-0. Coaching doomed the offense while poor execution on defense led to 2 big touchdown plays for UConn. We continued to spin our wheels and shoot ourselves in the foot on offense.
Defensively, problems against the pass are systematic, but in this quarter UConn's offense inexplicably played into our strategy and dared us to execute on defense. We did not. Over-reacting to play action, 6 points. A bad angle on run pursuit, six points. It doesn't take long and it doesn't take much to lose a game. Against UConn it only took 2 plays and 5 minutes.