After Russ Carrick managed only 5 wins in 5 seasons, the 1929 UB Bison stood at an impressive 4-2 as they traveled to Geneva, NY for their final game against Hobart. The Bison were led by 1st year coach Jay "Biffy" Lee and running back Edmund Malanowicz. 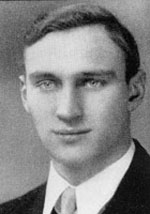 The Bison were not known for their offensive prowess. In the previous five seasons, Buffalo averaged 2.4 points per game and were shutout in 66% of those games. In 1927, their season scoring total was 7 points. Their scoring almost doubled in 1928 as they managed 18 points that season.

In 1929, with Malanowicz powering the offense, they scored more by their 2nd game (27 points) then their previous 2 seasons combined. The Bison were only shut out once in 1929, a 20-0 defeat vs. Rochester. 1929 marked the first time the Bison were shutout once or less in a season since Art Powell's 3-1 Bison team in 1918.

Malanowicz had the big play ability that opened up the UB offense. In 1929, he amassed long touchdown runs of 53, 55, 73 and 80 yards. He also had an 104 yard kickoff return. In the final game of the '29 season Malanowicz finished a legendary season with a legendary run.

Malanowicz set a UB record when he broke off a 95 yard touchdown run in Buffalo's 13-7 victory over Hobart. The run helped clinch UB's 5th victory of the season and gave the school one of it's most striking turnarounds, from 5 wins in 5 years, to a 5 win season. It also showcased one of the most explosive playmakers in UB's history.

Running Back is arguably the deepest position in UB history. However, 82 years later, no one, not Lou Corriere, Anthony Swan, O.D. Underwood, or Branden Oliver has bested the mark set by Malanowicz. The closest challengers have been Alan Bell, who scored from 91 yards in 1990, and James Starks who struck from 92 yards out in 2007.

Malanowicz graduated in 1932 and was co-captain of the Bison football team. When he wasn't busy breaking large runs, he was centering the Bison basketball team, where he also served as co-captain.