46 for 46: #6 Khalil Mack, Demonstrating the futility of recruiting coverage

Share All sharing options for: 46 for 46: #6 Khalil Mack, Demonstrating the futility of recruiting coverage

We here at Bull Run love covering recruiting. In fact this site started out it's existence with a piece about a Maryland Quarterback named Rudy Johnson who committed to Buffalo. In the five recruiting seasons I have covered here there is one thing that I've learned.

Recruiting rankings mean next to nothing, and the schools recruiting you don't mean everything. At the end of the day only the coaches and players have any idea just how high they can go. In the case of Khalil Mack that might just be #1.

When a players career is over what often separates an FBS player who will has a shot at the NFL and a guy who won't is how hard they work during the four or five years that they are at a university. While physical gifts are a huge part of the equation that does not get your name called during the draft, nor will it get you a call by a team as an undrafted free agent. 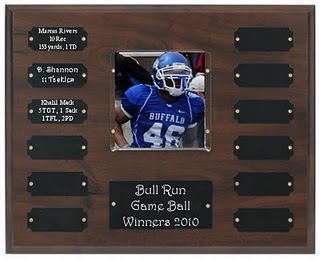 Khalil Mack was not recruited by any school but an FCS team in Virginia. When Liberty was after Khalil Mack they were all by themselves. Only a fortunate coaching hire by Turner Gill put Mack on UB's radar. Once Mack got to Buffalo he set the tone for the team in terms of work ethic. Mack was relentless on the field and off.

He went from a guy nobody was recruiting to someone who has a legitimate shot at being the number on pick in this years NFL draft. It's looking more and more like if Houston decided to go for defense over offense they will take Khalil Mack over Jadeveon Clowney.

Go back to year Mack signed with Buffalo and tell someone... "There is a future NCAA record holder and NFL first round pick". Few would have believed you. Bull Run did not mention Mack until September of 2010, when he won a "Bull Run Game Ball".

Last year Central Michigan's Eric fisher, a lightly recruited tight end coming out of high school was picked first overall as an offensive lineman by the Kansas City Chiefs. In the end it's more about the work you put in than the gifts you are given. It's a pleasure to watch players like Khalil Mack and Eric Fischer who have the gifts and do the work better than anyone.

We will still cover recruiting here at Bull Run, even if Khalil Mack Proved that you never know what you're going to get.