Much Madness - Mooney's vs. Grover's

Share All sharing options for: Much Madness - Mooney's vs. Grover's

Buffalo and WNY has some amazing places to eat. At Bull Run you will decide the best place! So far we have big wins by Bocce Club Pizza (Anchor Bar), Brennan's (Trattoria Aroma), Cantina Loco (Tempo), Charlie the Butcher (Salvatore's), Chiavetta's (Red Pepper), Duff's (Oliver's), Gadawski's (Mulberry), Hutch's (Lombardo), the Left Bank (Lake Effect Diner), and congratulations to Lloyd's (Kentucky Greg's Hickory Pit) for their victory. Up next is Mooney's vs. Grover's. 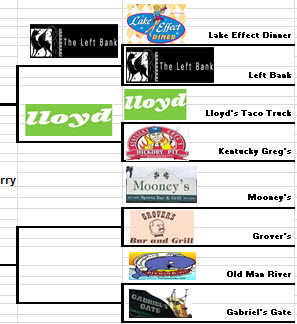 I do not know much about Mooney's other than what I see when I drive by Mooney's often and see the Blues Brother's statues on the roof and the giant motorcycle frame out front. I do see often on Facebook pictures of friends on the bike. I always thought of this place as more of a bar. I will have to try to food. This was nominated as a favorite by a contributor. Taken directly from the website: 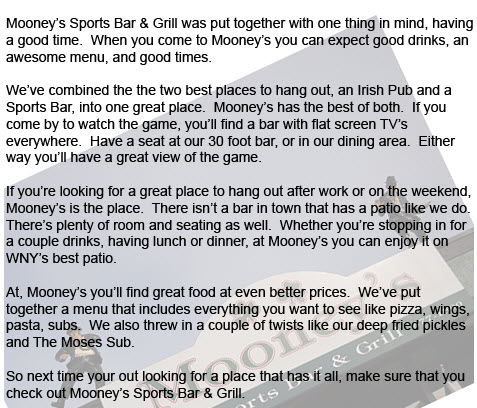 I did not see any videos on the interweb.

The restaurants who have been featured on Triple D have all flamed out in Munch Madness. Can Grover's end that streak? I have to ask myself a personal question. I like to eat, I love a great burger, I love dogie bags for later enjoyment, so why have I never eaten here I have heard more about the size of the burgers before anything but I have never heard someone who did not like it. Here is my buddy at Grover's: