Last year the FCS call up Minutemen gave UB something of a game. UB still prevails and took home the "Powder Horn" trophy dreamed up by Bull Run. This year UMass will have to travel to Buffalo and try to lay claim to the horn themselves.

SB Nation is now partnered with Ticket Master so if you're not getting your tickets through UB then you can get them here on Bull Run via the Tickets Link.

It's I-90 all the way and at least the portion in Massachusetts is bearable. It's at least a nice scenic drive end to end but the rest stops in New York leave a lot to be desired.

Buffalo's game with UMass is at 3:30 and there is a 1:00 concert. Factoring in the six hour drive it might be worth it to leave on Friday Night.

Just before you enter New York State there is a great Bistro in Lee called Chez Nous. It's a bit pricey but has some of the best reviews in the area. Once you cross into New York you're stuck on 90 with no reasonable restaurants.

As part of Danny White's push for 100,000 fans this year UB will be having five concerts, one during each game at UB stadium. Big Bad Voodoo Daddy will be performing at UB stadium in advance of the UConn game. Tickets to the game get you into the concert.

The Best Western on the Avenue is in the heart of Allentown, a Buffalo neighborhood known for the arts. It's also just a ten minute walk to The Anchor Bar, home of the Buffalo Chicken Wing.

If you're in the Allentown Area, or can get there, you will be a stones throw from Anchor Bar where in 1964 the Buffalo Chicken Wing was born.

Ill be honest the Anchor Bar does not serve up the best Wings in Buffalo but they are not all that far off and they are certainly better than you get outside of Western New York.

There are a few places along the way back to UMass but I recommend skipping that exit altogether and heading to Boston. Once there you can just walk around the city to see some amazing history, or do what I did and take a "Duck Tour".

The tour drives you around Boston in a World War II replica amphibious DUKW vehicles. The host was phenomenal both in their knowledge of Boston and the world in general. They were engaging, witty, and informative.

WARNING - It's a long tour, especially for the little ones. 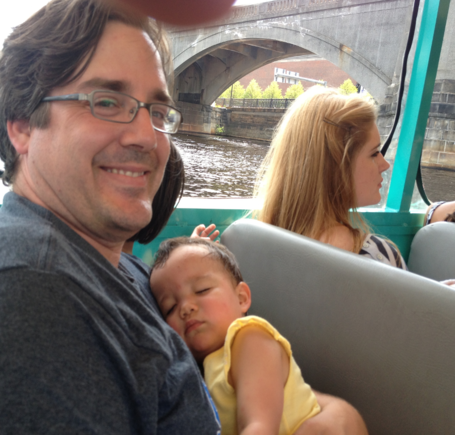