When the Bulls host their first game this season they may have the knee jerk reflex to dismiss an FCS school like Stony Brook as a cupcake. it would be foolish for UB to overlook the Sea Wolves. Other than a rather absurd team name Stony Brook is a solid squad who is quite capable of taking an FBS team to the wire. Last season the beat Army and they gave Syracuse all that the Orange could handle.

Sure UB beat them like a drum two years ago but it's a new season and the Wolves are hungry for another shot at Buffalo.

SB Nation is now partnered with Ticket Master so if you're not getting your tickets through UB then you can get them here on Bull Run via the Tickets Link.

Time - Five an a half hours

Tolls - The city is going to kill you. You will drop about 25$ in NYC Brig Tolls alone but if you stay mostly off the thruway and drive in the southern tier than your tolls on 90 should only be about 2.90.

I'm not a fan of the New York State thruway. The "service plaza's" are bland and the total lack of TA or Pilot stops is embarrassing. Throw in the price of Gas being way higher than you might get just off the toll roads and it makes 90 something worth avoiding.

So when you do make the drive from Long Island to Buffalo do yourself a favor an bypass smAlbany and Syracuse. The North Eastern Pennsylvania and Southern Tier of New York landscape is more scenic and basically Toll Free.

Any way you go pushing an eight hour drive from Stony Brook to New York so you are going to want to stretch your legs. Six hours into the drive you should hit Genesseo and the first Tim Horton's drive through.

Tim Horton, for those of you who don not know, was a long time Toronto Maple Leaf (1951-1970) who was picked up by the Sabres shortly after the franchise was founded. He died after an auto wreck in 1974. While he was still alive he co-founded the franchise which has out performed McDonald's in Canada. Tim Horton's also has a strong presence in Western New York.

The doughnuts are as good as Krispy Creme (my opinion) and the Coffee is better than Star Bucks.

This all depends on whether or not you intend to take in anything after the game. There is, of course the Marriott right off of campus but since UB's north campus is a stones trow from Niagara Falls you could also stay up in the Falls to make a weekend of it.

As part of Danny White's push for 100,000 fans this year UB will be having five concerts, one during each game at UB stadium. Blues Traveler will be having a concert at UB stadium in advance of the stony brook game. Tickets to the game get you into the concert.

First and foremost there are the falls. The American Side is not nearly as tourist friendly as the Canadian side so if you really want to have fun grab a passport or New York enhanced drivers license. The Maid of the Mist runs from either side of the falls but the Cave of the Winds is only on the American Side.

For my money the Cave of the Winds is a better investment if yo uhave a water proof camera. You will pass in front of the Bridal Veil, on a series of decks and walkways. Tropical storm-like conditions can be experienced, as winds can reach up to 68 mph underneath the falls.

If you're an Alumni from down state take a walk around Alumni. It's pretty nice to show your family around the college. 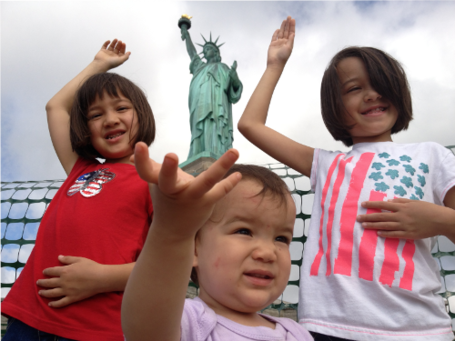 Did you know the statue of Liberty was just reopened after 18 months of being closed? A lot of New Yorkers were unaware. Then again if the Maid of the Mist were down for six months how many Buffalonian's would know?

As part of my exploration of the UB schedule footprint I hit the falls. Something I never did while I lived there. It was a blast.

So even if you're a native New Yorker it might be worth a ferry trip out to Liberty Island if the weather is nice.