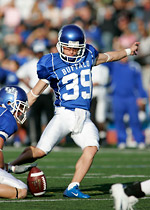 Ok, everyone have a good fathers day?

Great! Let's get back to it. Our first Kicker, Second defense, first and second tight ends went last round.

All that being said the teams are starting to fill out nicely. With four more rounds to go there should be a run on defenses, tight ends, and kickers. The thinnest pools in our suggested draft pool.

The Teams so far:

The Draft Pool is:

Note: (Donald Holland) Except for his completion percentage I only have passing numbers from 1951, he did lead the team in rushing 2 years putting up 697 yards on 153 for 11 touchdowns

Raymond Weser I only have one year os stats, he had 597 yard on 84 carries and 6 Touchdowns