First I was indifferent to the fact that we were in the CIT again. After reading the previous post however, it seems we are the #2 seed in this tournament and therefore if we don't get to the finals the season was a failure
it should be a good showcase of our talent, and a chance to go out on a more positive note than losing to Ohio again.

That said, as I waste my morning productivity filling out brackets, I realize that a good chunk of the fun in March Madness is the bracket. I really do not know what sample of the population the CIT polled to come up with this liquid non bracketed format, but they were wrong.

In the first round, the match ups are highly inconsistent. The games with most ranking disparity are: #30 Utah Valley @ #1 Weber State and #26 Coastal Carolina @ #4 Old Dominion.

There are 5 solid match ups:

Out of those possible matchups, half would be MAC rematches. If you include the winner of the Manhattan/Albany game as a possible matchup, then 50% of the 8 possible opponents would have a lower ranking than our first round opponent, which would mean the quality of opponent would get worst as you progress, which is counter intuitive for a tournament.

Finally, as home games are bought and not earned, UB is going on the road. It is spring break so chances are they would not fill Alumni with enough people to break even. Unfortunately, the quality of this tournament will most likely suffer as including UB, 10 higher RPI teams will be playing on the road against lower RPI opponents.

What the CIT should have done:

A) Rank 1 - 32 by RPI and have a bracket. If we can go to BYU and South Dakota in the regular season, we should be able to make the travel for a game or two in the postseason.

In this scenario, we'd host #31 North Dakota, then host the winner of #18 Utah St at Georgia State 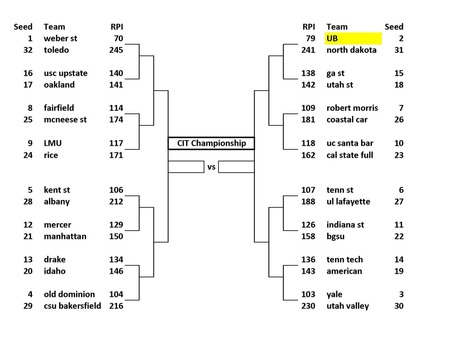 B) Rank 1 - 32, separate into regions, then have a bracket. If travel is an issue, then just do this.

In this scenario, we'd host Toledo, and the winner of #13 Drake and #17Oakland, Most likely getting a rubber match vs #5 Kent State to get to the final 4. 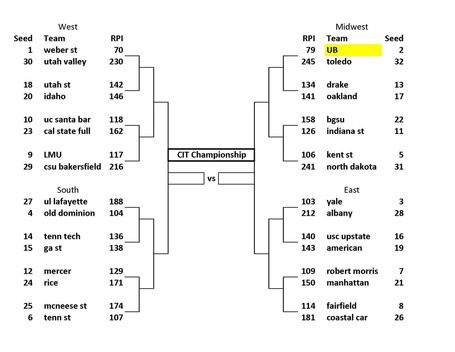