Share All sharing options for: 39 days to kickoff: Myles Nicholas

Outlook: The linebacker who wore #39 is now a defensive end wearing #94. Anything can happen at defensive end with seven young inexperienced players fighting for two spots. Summer will determine where everyone stands. 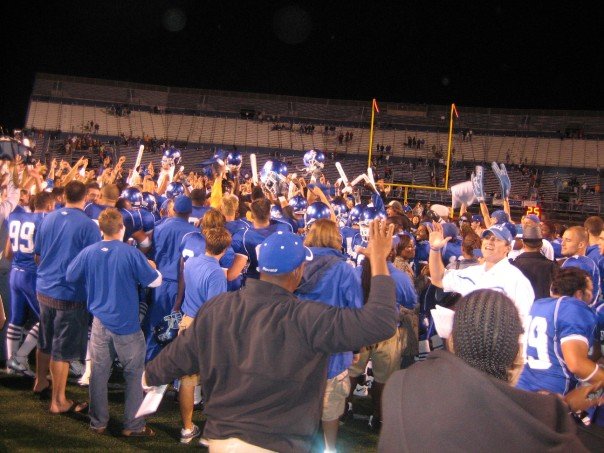 It was the beginning of a new era and the continuation of an old rivalry...

UB's only deep drive into Temple territory in the first half ended with a fumble on 4th and 5 at the Temple 23. Temple never really threatened, and the game was locked at 0-0 at the half.

In UB's first drive of the 2nd half, the Bulls drove down to first and goal at the 8, but had to settle for a 28 yard field goal, which sailed wide right, keeping the score locked at nil-nil. At the end of the 3rd, a net 12-yard punt by Temple set Buffalo up at the Temple 30. That turned into a 32 yard field goal attempt that missed wide left.

On UB's next drive, the Bulls drove to the 3 yard line before settling again for a 27-yard field goal, which this time was jussst right. UB took a 3-0 lead with 7:30 left in the game. Temple drove the ball down the field and with about 3 minutes remaining they had 1st and goal from the 2. Big stops from Ramon Guzman, David Hubbard, Ron Hilaire and Jeff Bublavi kept Temple out of the end zone. Temple kicked a 20 yard field goal with 104 seconds remaining sending the game into overtime.

Buffalo put Temple on offense first, and the defense responded with a Jesse Imes interception. UB went on offense with the chance to win with a score. Three plays later, James Starks broke free around the line and sprinted into the end zone for an 18-yard game winning TD.